Help: I have a few questions

Okay, so I am writing a story and want to know how authors do it? Like you see these bigger authors all the time with views over 500k and in the first episode of their first story they have a professional art cover by someone(doesn’t this cost money?), already have friends in the community, are pros at directing, and have all these credits and also an Instagram page with thousands of followers already. Just how? I mean I cannot be the only one who wonders how it isn’t difficult starting out. Btw, I love some of these types of authors and have nothing against them. Congrats to them for being that talented.

Also, side note that had nothing to do with this:
I am under the age of 18 but I really love writing and think this is a great platform. I don’t know if my story will be popular once I publish it, but if it happens to get over 500,000 reads (!!!) would I not be able to get paid? I of course write because I love it, but any amount of money could help me out since I am saving up for the future. If I also couldn’t use an adults bank account because Episode isn’t really known for having stories that are “appropriate.” The first thing you see on the app is It Starts With A Bra and used to be In My Bed (I think that was the title). And that’s what it’s known for, which I don’t care about, but my family is religious and it’s just better if I keep my writing personal. Is there any other way to do this?

To answer your first question… A lot of it has to do with sheer luck. Sometimes a story just seems to take off overnight, other times it takes month to build a solid following. But usually having a catchy title, using tags so people can search for your story easily and promoting your story a bit well help it get some reads. If you already have an insta, you could probably start doing sneak peeks before you publish so people start getting excited for it. The covers? I do believe some are paid for, but there’s lots of people who take cover requests for free that look just as good.

If you reach payments program, but are still underage, they will unlock it when you turn to 18 so you’ll get any money you’ve accumulated then. It’s kind of like it’s “on hold”

That’s actually really cool how they do the payments. I don’t mean to sound so rude or anything but do you know how much it even is? Is it like a certain amount per read or something? I’ve always been very curious about it.

And that makes a lot more sense about the story thing. I was super curious.

I have no idea, but have heard that some people rely on it for their income, sooooo I can only assume that for those who are in the millions, it must be a lot

A lot of the people who have that many reads and that many Instagram followers have been here for a year or longer and a lot of them are older, but that’s not to say someone younger can’t have success too.

Also their first stories usually aren’t the ones that get a lot of reads. It just takes time to build a fan base and it also takes time to learn how to code and direct a story to the standards that appeal to readers.

Having an Instagram definitely helps too though because you can get to know other members of the community and then maybe someone will make some art or covers for you, and you can also find people to do read for reads with or review your story which helps advertise it.

Just keep writing, working hard, and striving to do the best you possibly can and I guarantee your hard work will pay off!

Thanks you so much! I definitely am trying to find out as much about directing and the community as possible, but I don’t care too much about reads, but hopefully I’ll get some lol.

I wrote my first episode story in may, it’s 8 chapters right now coming up to 9 with 97reads, I’m currently working on 2 others too, not everyone has success with their first story,

I’d love to read it! What’s it called?

Here is it is, sorry I’m late with replying had internet troubles.
Story: Trouble and Lies
Author: ams007
Description: Rose a 16yr old girl. Secrets and Lies will be uncovered about herself and her family.
What will happen when she learns the truth?

The Best Stories Are Worth Sharing: Trouble and Lies © *INK* (revamping) 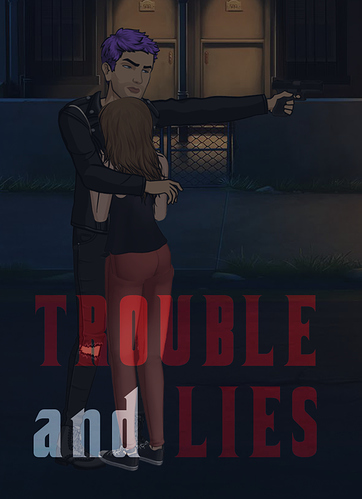 I’m SOOOO sorry that I am seeing this months later, but I will 100% check it out! I got a new account so I haven’t been active on this one

No problem, I’m currently revamping it.

Oh wow, how many chapters are completed?

I’m going to finish revamping all 9 chapters before I update next, since I got a new small and large cover and I want the new covers to be up with the release of Season2 which is chapter 11. the first 5 chapters are readable (but not revamped) but the other 4 are locked.

Oh right, makes sense lol. I procrastinate writing to the max so I don’t think that will be coming out soon lol:’)