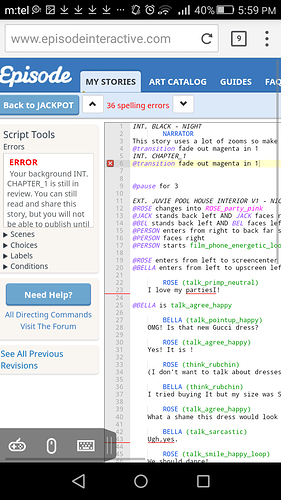 What is wrong with line 6?
Can I preview my story If there’s background that’s being “checked” ?

You can preview if a background being checked. As for line 6, there is nothing wrong maybe try saving again? or reload.

edit : I think that the error is meant for line 5.

I tried doing :
@transition fade out magenta in 1
and it worked.

In the error box it says that your background is still in review. Once the episode team reviews your custom background it will resolve itself. Your story will still save you just can’t upload it until it is reviewed.

Hi, I have the same issue, I would send an image, but I don’t have my laptop with me.

And there is another part of my story that has the same issue, it’s not referred to as an error, but rather a warning.

It says…@transition iris in black 5 is not a valid command.

I tried all the different transitions, even fade but it still doesn’t work.

Before the iris was working, but I thought I could make it turn clockwise instead of anticlockwise and that’s when the issue started, do I brought it back to how it was, but the warning continued. 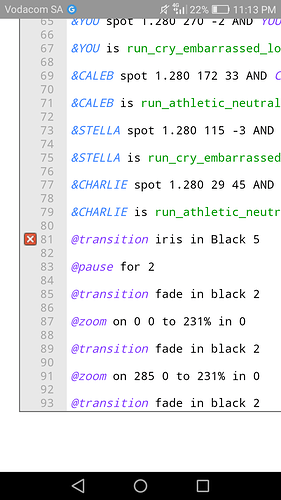 The “b” in black needs to be lower case

I tried that too

I know what it is,.
Don’t write black it will put it automaticlly.
Just
@transition iris in 5
tell me did it help

Yeah, changed it on my device and it worked, but since I don’t use the device as much I don’t know if it changed on the writers portal on my laptop, but, I’ll check.

Thank you all so much for helping.

I tried changing the B to b and it also worked.
I’m really sorry, maybe when I tried it the first time something else was wrong.
Thank you for helping.