Help? My overlay won't show up 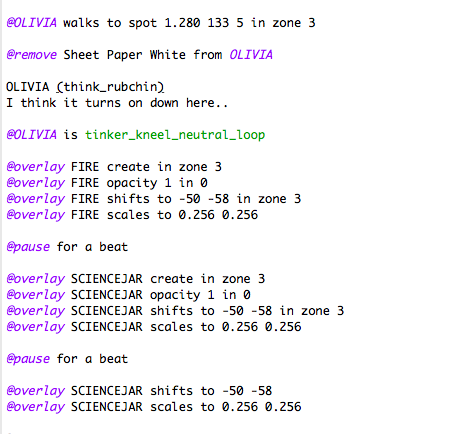 The code is wrong.
I don’t think @overlay FIRE create in zone 3 is a command.

Try that. Make sure you shift and scales are correct.
And layering.

To layer the overlay.

You can also use this method:

INT. BACKGROUND NAME - DAY with OVERLAYNAME to % x y in zone # at layer #

I already tried that, It didn’t work and I don’t want it there from the beginning of the scene.

Then set the opacity to 0

It will be invisible. 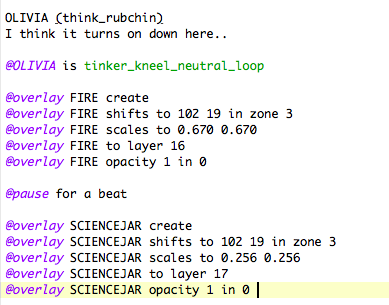 this is what I have so far.

it appears for a second and then disappears

Hve you tried adding it with the background?

INT. BACKGROUND NAME - DAY with OVERLAYNAME to % x y in zone # at layer #

I have two overlays that would need to be put with the background.

It can be done very easily, even when you’re adding it with the background.

OH MY GOODNESS THANK YOU, I was searching for the correct coding tysm

how would i do it, to where you wouldnt see it until i wanted it there?

Just add this under the background:

And when I need them to come into the scene? I can’t thank you enough.

now it’s almost perfect but my fire overlay wont go where i need it to, and i don’t know how to fix it

What do you mean? Can you send some screenshots?