i’m bored. what’s your house? if you don’t know, found out on pottermore for free!

mine is right here. idrc about being in this house, but draco pisses me off sometimes. he’s so drop-kickable i stg 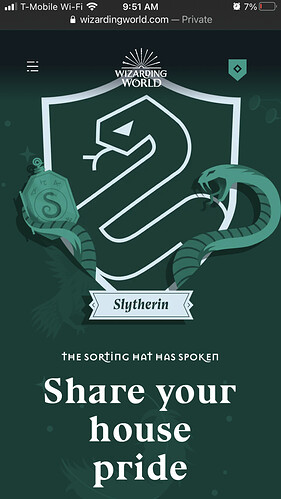 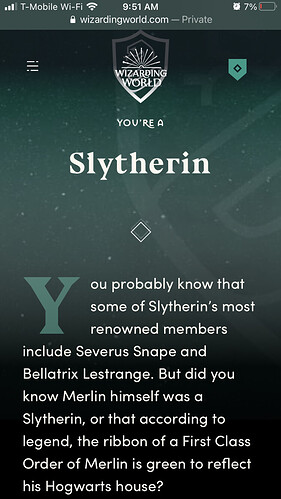 I’m also kinda upset because i was a proud ravenclaw before this, but then i went to the official pottermore and-…yeah. i was confused so i took like, 5 more and they were ALL SLYTHERIN. WHA-

I’m a Slytherin too. I doesn’t bother me because I really like Draco but he is very punchable sometimes too. But he’s also fucking hilarious!

edit; oh, and can we talk about bellatrix’s AND narcissa’s wand? chile-i could find bellatrix’s on the forrest floor. like, she’s cool but someone fr sat on her wand because that sh^t’s f*cked up💀

and narcissa’s is boujee af😍

oh-that escalated QUICKLY. but like, i can’t stop imagining a malfoy sister. i feel like she’d be legit perfect.

I used to think Luna was Dracos sister😭

imagine though? draco as the aggressive brother and like, harry, finding out luna was the sister.

i swear, the movie series was just harry being confused about EVERYTHING. and him third wheeling ron and hermione

i’m a slytherin too i-

Honestly I don’t think I could be in another house. Like Slytherin just fits my personality

Is anyone not a Slytherin?

Guys we should make a group chat! I have no epy friends!

uh, just saying that i’m younger than 14 (older than most american elementary schoolers though) so idk if that’s a bright idea👍🏻

Willing to bet that a solid 80% of us here are Slytherin. It’s easily the most common house.

i feel like he’s the, “no me first!” type guy and then leaves. idek why😅

wtf byeee
‘you hang up’ ‘nO u hANG Up’ VIBES

nah, he wouldn’t be there that long.

“i’m done. bye now.” and then him dancing with pansy at the yule ball.