How can I put the character in front of the overlay?

How can I put the character in front of the overlay? 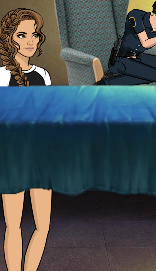 You need to layer the overlay

And if that doesn’t work, try the other way round

Jeez we were only trying to help you

You have to put the overlay’s layer under the character’s layer.

you shouldn’t make family jokes you have no idea what people have going on in people’s lives. this was totally unneccassary

She’s just trying to help you.

Topic closed for excessive violations of the Forum General Rules. There is no need to continue flagging posts that are already hidden. Thanks!