How did you find Episode?! 🥰

Well we all started by reading Episode stories -Mean girls, Emerald, Demi Lovato, Pretty Little Liars, etc. These stories are history of how all of this started.

Some of us started this year, some - last, but some people are here from the beginning.

If you want to check out my stories or anything, check my website! 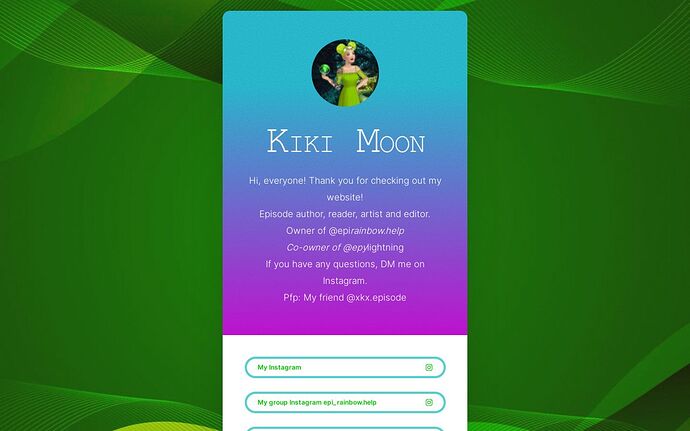 Hello everyone! Thank you so so much for checking out my website. Here you can find request forms. my groups and stories! Feel free to check everything out!💚💚💚

Now it’s your turn!!! Share your written stories and your trip to Episode Community below!

Hey all
Me name Is Lucy
Well I started reading last year
And i am currently on my first story
Slaughtered Tulips
Sadly, no one helped me
Soo I would like to promote my story

Slaughtered Tulips
Love you All <3

How did you start writing/ reading?

Started reading on my tablet, started writing by checking out Jospeh Evans tutorials on Youtube that was just the beginning for me.

Joseph Evans. No one else but him.

Joseph Flipping Evans!!! XDDD That’s how I got to know eveything then I came on the forums to find out more. Then I started out with @Dara.Amarie 's tutorials.

Feel free to check out my stories, I have more to be published soon, so stick around:

Moved to Episode Fan Community since this is not a forum game. Make sure to check out our Forum Tutorial for more info about creating topics, and feel free to PM me if you’ve got questions.

I found out about episode from advertisement in 2019. I am currently working on my first story.

I found episode since I was in college, maybe in 2015(?) from advertising
I read Clueless, Pitch Perfect, Mean Girls, Royal Baby, etc. I didn’t remember it has limelight style though.
Since my phone was old, it couldn’t handle the app size anymore so I uninstall it after a year

I saw all the ads and stuff back in 2018 and decided to download it a year later. I later joined the forums because I got a link to it from searching up a writing error

How did you start writing/ reading?

I wanted to start writing since March 2020 but I had no idea where to find the damn writer’s portal, but I found it by accident way later in Sep of the same year

I discovered Episode back in 2015 through a classmate. I saw her playing the Demi Lovato series and thought it seemed fun, so I downloaded Episode. I actually found it really boring the first time

, so I deleted it.
A few months later, I downloaded Episode again because of the advertisements I kept seeing and as of then, I became addicted. It’s funny that your opinion can change so quickly!

I started writing for Episode in 2019, where I also discovered the forum. Various Episode YouTubers really helped me learn the basics for coding!

Little self promo over here, hihi

Found episode through ads on a different games my sophomore year of high school (I graduated in 2019), found forums after learning how to code my own story.

Learned to code/know everything from watching videos on YouTube by Joseph Evans, Mary D Sava, and Episode Notes. As well as ask on forums

I remember reading Mean girls when I was reallyy young

How did you start writing?

On my birthday in 2020, I was honestly looking for something to do since my friend couldn’t come over due to covid and I decided to start something new & try coding episode! It’s honestly one of the best decisions I have made

Like most people here, Joseph Evans and Dara Amarie ( and some people on here too!)

An ad, and we all know how those ads went

I still remember when they let us write on the phone, I’d write until I could fry an egg on my phone. And I was obsessed with the amazing directing from the kiss list

I dont know how exactly i found epiosde, but it was in the pretty little liars stage, and my mum wouldn’t let me get it because it was too mature

but i downloaded it when it was at the demi lovato stage… say what you will. I joined forums 2019 maybe?

i started writing 2020 and i still dont know how to code
i didnt.
idk

I use to LOVE Episodes when I first started to read/play it was a game for sure you really did get to choose the stories fate but for some years now the only thing you can choose is what you look like no part of the story is in your control anymore & a lot of the time the author doesn’t want you to change the look of the character as well!! . The game use to be so much fun now it’s all about the gems & rules you can’t enjoy the story like I use to !! They have taken out all the fun parts of the story as it was seen to be to mature for children of the age 13 I don’t know how I. Have seen films that show more than Episodes do. We were informed that a adult version would be released for us adults well that was 2 years ago & nothing!! Other companies have brought out apps doing similar things but not episodes as promised. I’m holding out for episodes to realise their adult version as I know it will be the best app out there but I do play the other apps while I’m waiting.

When how did you find out about the Episode, community, forums, etc.! I’ve played it on and off for years. Joined the forums…fall 2020, I think.
How did you start writing/ reading? First attempts were on mobile creator. Took me several tries to stick with a story and publish one!
How did you get to know everything? I’m a fast learner, I guess? And practice.
Who helped you? Dara Amarie! She’s a queen.

This is a pretty adorable story actually

My older cousin sister and I used to be the bestest of friends and we were obsessed with everything related to barbies, pink, stories etc so one early morning in 2016, She ran to my house to tell me she found an app called episode, this was the year mean girls was released which we were obsessed with. So we went to our aunt’s house and played episode in our aunt’s phone. It was a memorable morning but now she is 22 and doesn’t have time to play episode anymore which sucks but I would do anything to go back to my olden times lmao

i don’t really remember i was 13 when i discovered it i probably just saw it on the app store.

How did you find out about the Episode: I was playing another game and needed coins for it, so I searched the “free” section and noticed one for Episode. It offered players a certain amount of coins if we downloaded and played two stories from Episode, so I did. Little did I know that I’d soon delete the other game… and Episode would become something that I played on the regular.

As for the forums, well I was intrigued by the “community” tab on the portal… so I clicked it and landed here.

Saw my friend in middle school in 2016 playing it, and I asked her what the app was. She said it was Episode, and I downloaded it on the app.

I got inspired by other high school stories on Episode to create my own, and it was so cringey. A bad boy LI, a blonde mean girl, and I don’t think I was planning to develop the MC’s new friends or best friend that much. I also started the first episode with waking up in the morning being late for school, so there’s that

I got to know a lot thanks to other writers on YouTube and Instagram (not related to Episode), and I’m still learning coding by Tal Gordin and Joseph Evans.

So yeah, there’s my story.

i don’t know to be fair.
started writing 2020 (its a work in progress till)
started reading oh god like 2015?
I made mistakes. a lot of them and i’m still learning (i dont know how my trust level is so low if i’ve been on the forums for yonks)

I found Episode through an advertisement. The trailer was authentic, compared to those overused “I bet you can’t finish this” tropes. So I gave it a try. And my oh my, it is one of its own kind.

I started reading as a naive, lost sheep in the greenfield. I literally bought into everything I read, that being featured stories because… Back in late 2019, 40 something featured story chapters are required to unlock everything.

I started writing after reading some action stories that reminded me of my own script (it was formed out of thin air where I had no intentions of making real), and I think it was a story from E Walker? It was a long time ago, the author herself retired from Episode back then.

I started coding with the blessing of Episode’s Messiah- I mean, Joseph Evans. Other than that, I bumped here and there for a while until I got a grasp onto writing.
It only started in 2021, where I was bored and been reading for a while back then. A friend-author of mine on the app (she’s more active on IG) encouraged me to write. So I did.

The original script is still there, though a lot of things would’ve changed by the time I revisit it in the near future. I’m leaving that one in the fridge to marinate as it has all my heart and soul in it.

I have two published stories, one being my solo (Rogue-7) and another being an SWY collab (Closer Than Two Magnets).