How do crowds work?

I’m doing a scene where it needs a crowd but I have no idea how crowds work.

you’ll have to individually spot each character, and use layers to make a crowd!
i’m sure there are some script templates for you to use, if you’re having difficulty <3

Just create a bunch of characters, name them something like:
RAN1, RAN2 ect…
or
BG1, BG2 ect…

(You can create a bunch of random background characters using the randomiser. If you want it to not display their name then just delete the display name once the character is made

Then just spot direct them (size + place) , add some repetitive animations so that you don’t have to keep animating them and check the layers!!

I find it useful if the crowd is behind the MC and whoever is with them, to put them all on layers lower then 0, so then they can’t get mixed up with the MC’s.

What is a ‘randomiser’? I never heard of it.

So you don’t create a character, you just put them in your script and then a box will appear saying something like “unknown character” or something and ask you to choose their gender and it will create a random character for you. 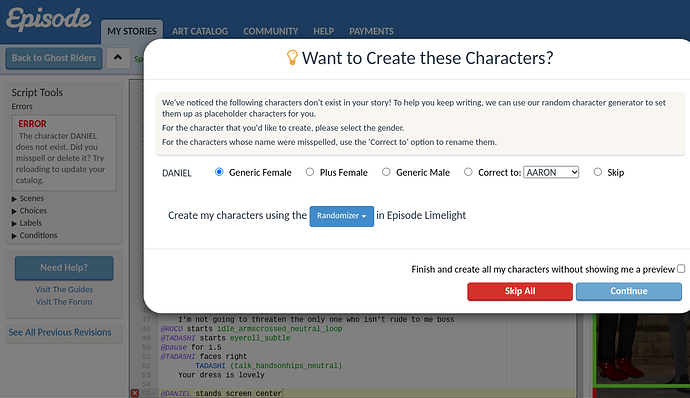 So in the example above, I never created a character called “DANIEL” , I just put the name in my script and so it has offered to make a random character for it. You can then edit them later like you normally would

Another thread explaining it a bit

Hope this helped a bit, and again let me know if you want me to explain it more or if you need any more help