Hey, guys, I was reading the pregnancy game story, how do we make our characters look like this. 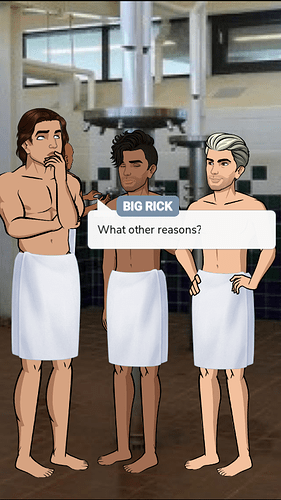 do mean taler. you use spot directing

you just make the outfit without a shirt on

which you cant if you write on mobile

I believe Episode removed/told the community not to use this athletic body type coding since it’s very glitchy and could mess up the story if readers are reading it. It works fine in this story though.

wait it is another body type.

i can see it now. i just thought it was the way he did stand

Yes, it’s another body type only available in ink.

I saw a thread from the old forums that was saying “Do not use the Male athletic body type” and other people were commenting, that if they used that command, they would have random characters popping up from the screen and they have to start their story from scratch. And other people commented that it won’t allow their story to be published? I’m so confused because I read two stories that had at least one character with the athletic body type?

Are users allowed to get featured.?

Allowed? Of course. A few community authors have been featured. Likely? No. Episode seems to get all of its ideas from Wattpad recently.

How do we get featured?

Episode has to like your story and approach you, asking you to sell it to them. The likelihood isn’t very high, if I’m honest. There are authors with millions of reads that don’t get featured.

I don’t think they do INK featured stories anymore though, so you wouldn’t get access to the athletic body anyway haha.

I wouldn’t hold my breath if I were you. Even if they ask you in the first place, there’s no guarantee they’ll actually feature your story. Sometimes they ignore you after you sign the deal