How Many Years Have You Been Here?

I began writing on my first account in 2017. A year later, after many, many questions that I needed an answer to, I found the forums.

All I have to say is; Thank fuck they don’t give us the amount of time we spend on here. Because- Holy shoot. I have spent more time on here than I’d like to admit. 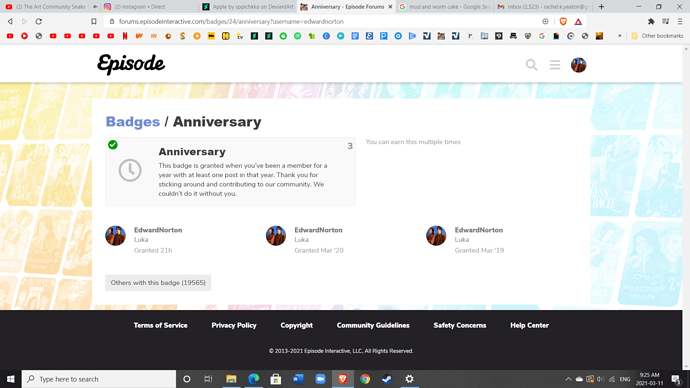 How Long Have You Been Here (Community and Forums)?

Active on here since December but I was in the community for much longer.

I don’t know… … … to be honest I officially joined this community/forums since April last year. but I created this account for much longer then that…
hope it makes sense

community I wish I remembered the exact year that I downloaded Episode for the first time. I think I started reading on 2015 one year after it came out but I remember I used to install and uninstall it all the time because it was always crashing on my devices.

May 31, 2018. Was here for my first anniversary then went offline for a year… came back again this January.

In the forum and started writing since 2016, but been a reader since around the summer of 2015, when classic was the only style and portal previews didn’t exist. You’d have to spot direct from your phone then manually type in the coordinates on PC, dark days…

Look at my profile

I’m a little newer around here; I’ve been reading longer than I’ve been coding, though. Started coding in October, I think?

I’ve been reading stories on Episode since 2016 (so 5 years) and I’ve made a few trashy mobile stories as well. I made a forums account like a month ago although I’ve been snooping around here for a while now.

So I started reading Episode stories since like 2016.
In forums I joined Oct 28, '18. I was offline since, but I came back this February.

A quick summary of my existence here

So in community 3 years, have been writing for 2 years

I’ve been reading Episode stories since 2017, I think, but I didn’t join the forums until March 2018

I JUST WANT TO TALK ABOUT YOUR USERNAME.

(Also, I’ve been reading Episode stories for 5+ years. I started reading in 2014. I made my first story in 2015 but ended up scrapping it)

I joined the community at the beginning of 2017, joined the forums in early 2019 but only started being active on here this year I think?