How to assign CHARACTER to the name template?

I don’t really know how to explain but no characters names are popping up for me to assign them.

What do you mean exactly?

Like this I’m trying to assign a specific character to this name template, but the characters names aren’t popping up… 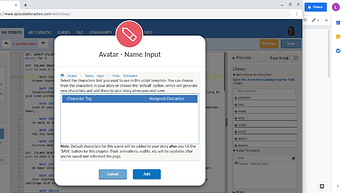 Have you already created these characters?

Yep, I have 10+ characters already but I was researching how to let readers choose their name and most of them said make a character named YOU then change the display name to FIRSTNAME so in my script I put

Naming a character? So, I can’t go on the portal rn but in a naming template, no characters are used, so they are not present. It’s just a few lines of code.

Dara Amarie's guide to typed-in choices where authors can ask readers any question they desire and let the readers type in a response.

To name a character all you need to write is (example):

NARR
[NAME] is such a beautiful name!

And it doesn’t have to be NAME, it can be anything, JEM, ANNA, YOU, FIRSTNAME, FOOD, etc.

How do I get to remember the name I choose for my one of my 2 MCs? Creator's Corner

So I know you solved your problem but I wanna quickly write this on this thread so I can link it and use it to help someone if they have a question about display names and script names: Example, let’s say you have two characters. One is named JEM and one is named YOU When you go to characters it’ll say this: Script Name: JEM Display Name: JEM Script Name: YOU Display Name: YOU The script name is the one that you type in the script while the display name is the one that is shown to the rea…

So it’s normal for it to say Auto Bot as it’s name?

Yep, I get that on the web previewer, pretty much everyone does, they can’t name their character. But on mobile, on the app, you can.

Oh OK thank you soooo much, I was getting a little worried but I didn’t think about checking it on mobile!