HOW TO: Direct with spotlight 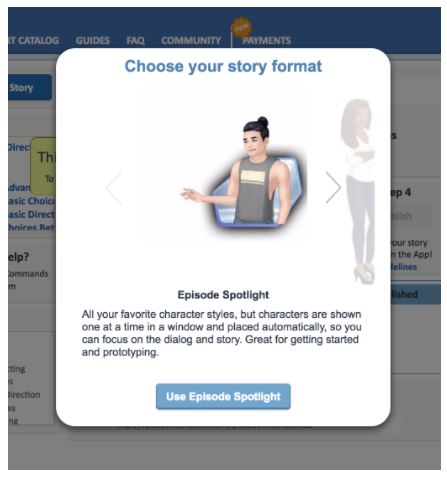 Selecting this format means the entire story will be in Spotlight. You cannot “ set format spotlight ” in these stories.

So when using spotlight feature your are not suppose to add or place characters in a spot, just make them talk with no commad for example

But you don’t have to make them walk like…

That will just give you an error or warning

When a simple, non-dialog emotion is inserted, characters will swipe on to emote without saying anything:

Find a space there that says Main Character

#the story will be in a text format , meaning that it will look like you are sending messages to a character (Not actaully typing but pretending that you are sending/receiving the text messages)

If you want them to customize the character using spotlight you have to add the ((character_stays)) in every dialog which might take some time to do so…But other than those basic things all the other things should be the same like overlays, backgrounds, choices, conditions (effects), flag, ect.

you can see an example HERE!
More about spotlight coding you can see HERE!

2 Likes
"Stupid" questions that never get answered? Get The Help Here!
Character Entering
My character won't stay on screen!
Helpful Links for Authors :blob_hearts:
Need help with the first story
Could anyone help me? :(
Bugs, Spot Directing
Davidcrvz August 19, 2018, 11:17pm #2

But I hope I fix it now, please tell me if I did some kind of error

I have a question though. How can you make two character be standing at the same time like one in the middle and one in the center in spotlight?

Ir is it possible? Cause I saw a spotlight story that 2 character where in the same screen in spotlight. Do you know what I mean?

Okay I will try that thanks @Davidcrvz!

Hmmm I am not sure why you were flagged but to answer your question yes. They will be always blue and can not be any other color. It can be a cool feature though

I think there must be something wrong with your account that makes all your comments flagged, maybe try creating a new account?
@Sydney_H any help?