📂 HOW TO: LAYERS - characters and overlays

Layers are essential if you have more characters or overlays (or both) in the scene and you need some to be more front or more back. Like in this scene below. 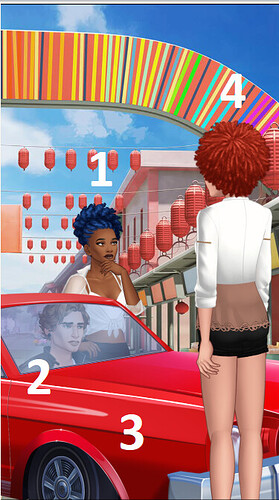 The principle of layers is simple -

what is more front (closer to the screen - like the red-haired lady) must be on a higher layer number than what is more back.

If you still struggle to imagine it right - try this: think about the layers like separate sheets of paper - each character or overlay it cut out from one of the papers and if you want to make this “paper” scene you will first put on the background the character which is in the back (layer 1) and then you will add another layer or paper which will partly cover them (layer 2).

WHAT NUMBER OF LAYERS YOU CAN USE?

CAN YOU SKIPP SOME LAYER NUMBERS?

HOW TO SET CHARACTERS TO LAYES?

HOW TO SET OVERLAYS TO LAYES?

In case you create an overlay in the line with a background you can also ad a layer there:

if you use UI command:

HOW TO SET OVERLAYS WHICH ARE INCLUDED IN SOME EPISODE ORIGINAL BACKGROUNDS TO LAYES?

The episode has some backgrounds which have an overlay already included - usually they have OL in the name. like:

if you want to set the overlay included in such background to a specific layer you have to write it like this:

if you do not set layers to your overlays and characters, the script will set them on a default layer - usually 0, 1, 2, or 3 - problem is that while on your phone the character will be set to layer 3 in another phone he might appear on a different layer so even if it looks right in your preview it might be all mixed up on readers phone, therefore, it’s wise to set the layers always.

Basic directing for walking and exiting resets layers. even if you set them.

So in case, you set character on layer -always use spot directing for walking!

11 Likes
Need Help with overlay with bg
Help Needed Coding, Please, It Looks Horrible!
I need help with a script (:
The Complete List Of Coding Tutorials! (:
I’m having a hard time to move my girl character in front of the overlay
Dog won’t appear in mobile previewer
Scene Help Needed ASP (LL) Soulmates <3
JemU776's Help Thread
How To make one character stand outside an apartment door?
I need help with running/walking in front of overlays
Overlay switching between layers
The Complete List Of Coding Tutorials! (:
How do I add people to this back ground
I need a car background
“Stupid” questions that never get answered? Get The Help Here 2!
AlexandraD January 26, 2021, 1:17pm #2