How to make characters stare

I am working on my first story and was wondering how everyone are able to make their characters stare? I looked for the animation, but not sure if writers have used a different animation and got the very end of it when the character has stare as if the were weirded out.

The animation is called shush, you’ll only get this facial expression at the end of it though.
You can either

Right! I figured that it may have been the end of an animation since I have only seen writers do it right after a scene cut. Thank you so much for your help!

Hey what the animation for the 3rd face you put up?

It’s the animation scream (the end of it)

You can even test it to see.

If you write in your script:

NARRATOR
To be continued…

You will see that expression : )

Of course, you’d replace CHAR with an actual character and after you’re done testing it out, you would erase this code. 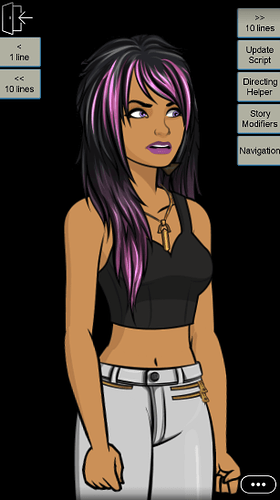 What is the second and the third animation?