HOW TO: Remember Past Choices! (if/elif/else) (FOR BEGINNERS!) -Easiest Method-

NOTE: I personally think it’s better to put “gain chose_choice” instead of like “gain choicename” because I tested my last version of this tutorial and it didn’t work sadly for me.

That’s it! I hope you enjoyed

wow that was great

Again, it won’t work because the last option should be else without the second gain name.

I got it from Joseph Evans you can view the tutorial yourself if you would like https://www.youtube.com/watch?v=O8Div8rU8AA

(PS: I have also tested it on my own script etc)

It works perfectly and there was no need for Joesph Evans in the tutorial to put “else” anywhere.

Again, thank you for letting me know, if anyone gets any errors I will let them know what you have said

@Apes is right. That code might work at first but it starts glitching after a while. We’ve helped many people on here who have had issues with this type of coding. It’s always fixed with using else. I would not recommend this nor would any other OG coder on the forum.

@RudeInception, I got this from someone who has been on Youtube since September 2013, And I have tested this enough times (Yes even in my own story in process) to show it works. I do not mean to be rude or impolite in any way but I am just stating my research. Maybe the way you do it is different and still works. (Yes the first tutorial I made myself was just guessing)
I was a little bit confused then and you helped me. And thanks! I appreciated it, but I have done my research more than once. I have tested it multiple times. Here is some points I’d like to gather:

I know I may be new to forums but I still know when I have properly researched and when I haven’t (EG: Last time I didn’t research properly that’s why I told you were correct, but before I took your advice on “else” I researched more.)

Thank you for your time non the less but I have researched.

NOTE: I do not mean to be disrespectful in any way.

I appreciate you doing your research, but as you said, you’re new to this forum. I (along with some other amazing individuals) have been doing our rounds on Episode for a few years. I’ve been around Episode before Joseph Evans began making YT videos. And I’ve been on this forum helping others long enough to acquire a good reputation for being helpful as well as knowledgeable. Does this mean I’m better than you? No. I want to make that clear just in case my statement is taken that way. But what it should mean is that I know what I’m talking about. And I don’t want to tell you how to code, but if you’re making guides for others on the way you code and I see an error, I will let you know. You said yourself that you guessed on the first guide, and now you watched one YT video for this new guide. For me, that’s not enough information gained for you to be dismissing our advice, especially if it means causing code errors for some users. Sorry.

Here are just two examples of people having issue with this method in the past:

Only one choice working? Creator's Corner

Hey guys I can’t figure out what’s wrong with my coding but the choices provided only allows the character to go to one place even though the other option is chosen. EMBER (What should I do to pass time?) choice “Go to the cafe food is lyfe.” { sound ding EMBER (admire) (Finna get some food up in this bih.) @EMBER exits right gain chose_cafe } “Go back to your dorm and chill you had enough.”{ sound ding EMBER (talk_shrug) I've got nothing better to do. @EMBER exits right ga…

Goodnight everyone. Lately I am struggling to make the script remember an outfit that I chose. In the third scene of chapter 4, I put a label dressing_game. After that another scene and them a flashback follows (where I made the character change to another outfit). After of that scene, I would like the character wear the outfit that I selected previously, but the character is still using the outfit I put in the flashback., Although I put the code to remember past choices. Could it be that I’m …

@RudeInception Thank you for stating your points, though I would like to state a few others:

Thank you for your time.

“You are a real life-saver. I learned using Episode just by watching all of you videos! ;D
I do have one question though:
I downloaded a customization thing on the internet, and put it in. Do I have to do anything else for Episode to remember the looks that reader created, or will Episode remember this in all further Episodes?﻿”

Yes, I know there is a question, but this is related to the outfits, not the choices.

PS: Someone tried your else tatic and it didn’t work. here is what they said and replies etc 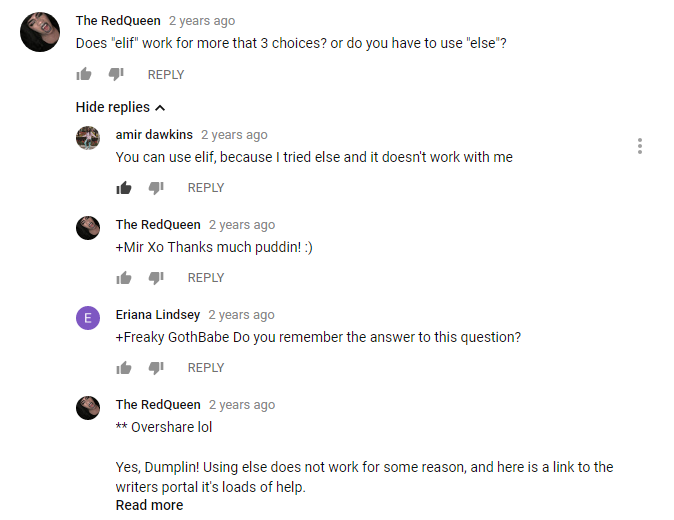 I know it was 2 years ago, maybe it works now.

But as I have said I have tested it

Thank you for your time.

I know, but I have tested it and I’ve shown enough evidence.

I even use it in my own stories :T

Sorry if you were left mad at me. But you are not a official moderator, I would get it if a moderator said this but they haven’t that’s the main reason why I’m saying all this.

Sadly I have to agree with @RudeInception and @Apes with this, even I experienced with the same problem (but haven’t told anyone until now) with the if/elif/else branch. Not to be rude or anything but hope you understand this better

I understand, I can take this down if you want