HOW TO: Spotlight Format

If you have a story using full character display, you can switch between that and spotlight.

So, in a cinematic format story (a full character display one where advanced directing can be used and spot walking), you can switch into and out of the spotlight format using these commands:

When you first create your story, it gives you options on what you want-first, select the style you want-Ink, Limelight, or Classic. Then after that, you can select either Episode Spotlight or Full Character Display. 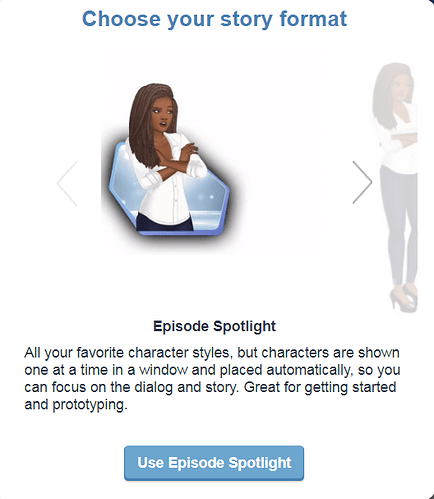 Note that if you select for your story to be in Spotlight Format, you cannot use set format cinematic in these stories-your whole story has to be in spotlight.

When you select the Spotlight Format and make characters, you’ll notice on the side something that says main character. From here, you can select a character-any one and what this does is it puts them on the left side of the screen-so they would appear on the left when speaking in spotlight. 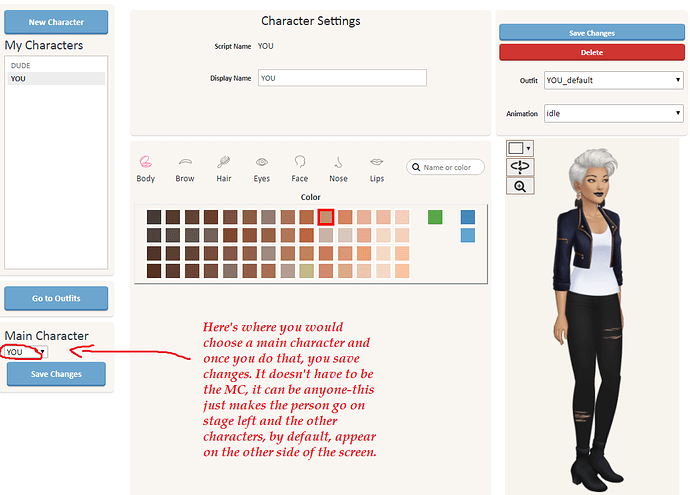 In Spotlight, you can use backgrounds, transitions, pans, cuts, animations, dialogue, Choices, flags/gains, labels, gotos, overlays and much more-the same things that can be used in Cinematic however, there are some differences, like the fact that spot walking isn’t used.

When you use Spotlight, characters will swipe in when it’s their turn to speak and swipe out when they finish speaking (aka, when you click to move on and it goes to another character)

Another thing-when the character does a non-talking animation (example: @CHARACTER is laugh_crackup) , they will swipe into that scene to express that emotion without saying any words and then swipe out.

Also, when we use cuts or pans in our story after a character has spoken, they will swipe out before the scene goes to the part where we cut to/panned to.

When the Narrator speaks, characters will swipe out first. (So the person who is speaking swipes out of the scene and the narrator speech bubble pops up with dialogue)

If you want a character to stay on while the narrator speaks, the code would look like this:

WILLIAM (talk_mindblown)
Yo, Diana, your superpowers are so wicked!

*This is just an example. I used random characters-also this code only applies to the last character that was on stage. That last character was William so when the narrator speech bubble appears with Diana thinking this, William is still on the screen.

Want to hide a character on stage? Can use the command hide CHARACTER

So, an example in your script could look like:

DIANA (talk_mindblown)
I’m getting out of here and fast!

NARRATOR (WILLIAM)
Where the heck did she go? She left me all alone to fight the bad guys…

One more thing I want to talk about before I end off:

You can change the position of a character on stage.

You can change his position by writing:

*Please note that POSITION would be the new place where he is appearing at and direction is the way he’s facing. Replace those two words with an actual position and an actual direction.

WILLIAM (talk_sad)
I’m not that heroic like you, Diana. 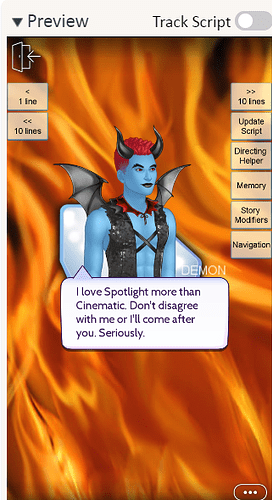 You can find all of this in the Episode Guides, a source that I used : )

Thank you for checking this out and I’ll probably add more detail as Spotlight advances!

If you use this in your cinematic story, it makes it appear like a text and was discovered by the wonderful @Gina123

Check out that thread:

Has anyone else noticed this cool new feature? Creator's Corner

To use it, can write these commands: 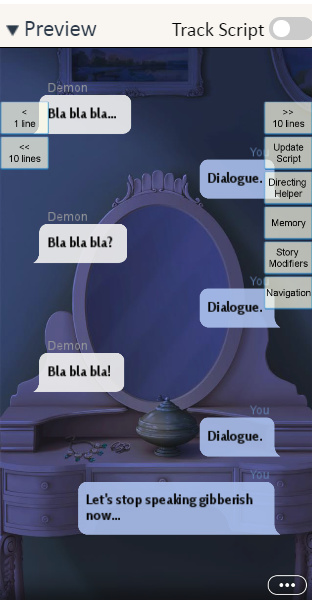 Again, this just an example <3

So basically, all that YOU and DEMON are saying would appear like a text.
*Note that you can use any character that you want and any speech for the dialogue that you wish.

*By the way, for this scene, YOU is chosen as the main character using the method shown above in HOW TO: Spotlight Format.

This is seriously really cool!

Oh my god, the phonetext format is INSANE! It’s gonna make my story sooo much easier to write.
THANK YOU SO MUCH

And the spotlight format looks really cool too, I’m definitely trying that out 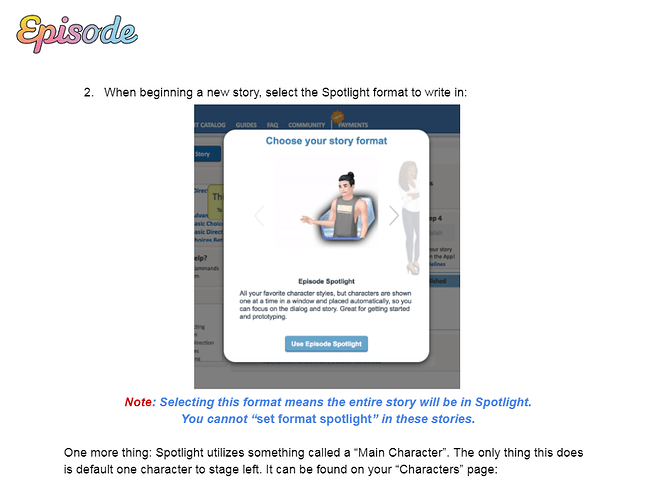 So, when looking through the guides in the Spotlight section, I read through this and saw that it says: " Selecting this format means the entire story will be in Spotlight. You cannot “ set format spotlight ” in these stories.

Wouldn’t it make more sense to write " Selecting this format means the entire story will be in Spotlight. You cannot “ set format cinematic ” in these stories.

@Apes , @Alexx.lapakka
What do you guys think?

Yep, they clearly made a mistake

Hopefully, it gets fixed but then again, it’s so minor so I guess no worries

Let them know by sending a ticket maybe

I think that would be the best option

Is this only for limelight cause in ink it doesn’t work for me?

Hmm, set format phonetext should work for all styles

I’ll check it out

You’re not the only one to experience this annoying problem, can see this thread: Has anyone else noticed this cool new feature? Another user tried it and it didn’t work for them

it’s not working for me anymore either

Don’t tell me they got rid of it, it was so cool

I mean it doesn’t even give an error in the script, it just doesn’t work : /

Ok, I just sent a ticket for this and I pray to God everything works out and it starts working again soon

this wasn’t officially out so they might change command or something. Let me know when they reply to you

I wish to know what’s up as well.