I can't click on my overlay to move it 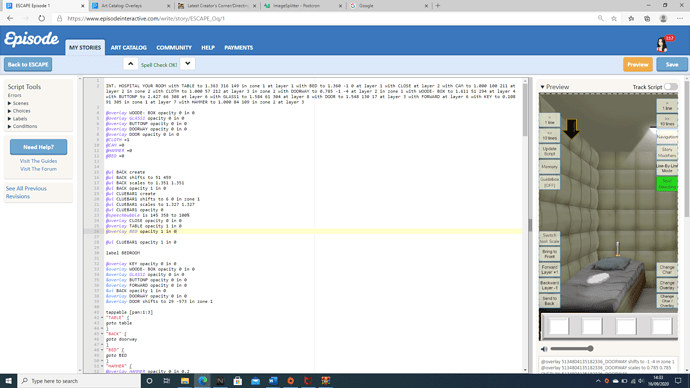 idk if this would help or even help at all, but is your overlay’s name really “WOODE- BOX” or is it a typo?

Did you mean a picture of the episode itself or the script?

The overlay is spelt correctly

Ive tried moving all other overlays out the way

Sometimes what happens is when you have other overlays in the script which have a particularly large margin around them, they overlap the other overlays so you’re unable to click on them.

Did you say you couldn’t select the overlay through the spot directing button in the previewer?
If you are able to, find your overlay there and press ‘bring to the front’ or ‘layer +1’ to move it in front of all the other overlays then try clicking on it again. If you’re still unable to do it, try clicking somewhere else in the previewer and dragging to see if it will move it and the calibration is just off.

What is the overlay you’re trying to move called? Because I don’t see anything about the screwdriver head?

because I can’t see what is and isn’t happening and can’t try different things out.

I would think it might make more sense to have the reader find the shard first, then cut the bed open? so in that case you would ensure the tappable shard works first so once the reader taps on the shard it would be SHARD +1 so your script may look something like:

label mini_game_end
NARRATOR
You did it!

That’s what I’ve come up with if I understood you correctly?

Well I’m glad you’ve figured it out!
Seems like a super interesting mini-game!

Thank you xx it’s actually the story so the while story is actually based on an escape game. I doubt it would be a long story as I’d need to make each chapter long enough to make it worth reading in the first place.

The storyline is based on you the reader waking up in a padded room and having to escape before you are experimented on as well as figure out what they are trying to do and save others. It’s played in first person so you don’t have a main character as you are the character. If that makes sense lol

Makes perfect sense and sounds super interesting!
Let me know once you’ve released it, I’d love to check it out!