I need a little help with directing 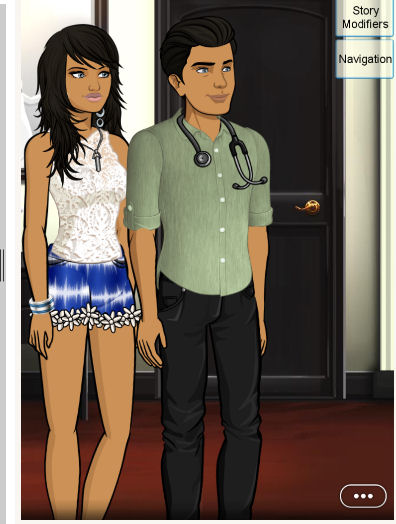 I let those two walk trouh the zones to that spot with this command:

Ho do i make them go to the door know and knock?

Hi.
To have them walk to the door you need to use spot directing.

Here’s a guide by RudeInception how to do that.

You have to use animations with ”rear“ if you want them to turn around.
There‘s no knocking animation tho.

Ok, that makes it easier to explain

Use walk_rear instead of walk and have them going up to the door.
Don’t forget to put a command for them to remain rear when they’ve reached their destination, or they’ll just face front again. And remember to always have rear characters facing the opposite direction that you want. So if you want them to stand looking to right, put left etc.
As Laura_Knox pointed out, there’s no knocking animation, but you can use anyone of the talk_rear animations as it wont matter if they talk due to you not seeing their mouth moving anyway.

Now they walk again after my comman and in the opposite direction, the just need to turn both. and going to a spot wich i need to see when they stop with the command, so a want a script that they turn both to a spot x and the spot i will change

You can’t use the ex I had for your background! I just made that up to show how you write up the code.

You need to switch the coordinates they walk to for one of your own.(spot direct them)

Ps. Sorry, should have been more clear about that.

I have written what you have sayd and they were both goming from an other direction one rear and the other not and turned then rear, that is not what i need. I really need someone who speeks dutch in here i can’t make myself clear in english lol

Ok. I’ll see if I can break it down a bit for you to make it easier. It would help if I had your code though.
To use my example, (not for your background!)
Change the bold parts for your own desired.

After. When they walk up to the door, else they’ll walk rear through the hallway as well and I don’t think you want that,

So follow them across the screen as they walk down the corridor, then have them walk up to the door in the background and have them doing it in the rear,