I need Characters for my story again :) (INK)

Base line:
Your character will be part of a ‘clan’ named Rogues (Very infamous) and they work underneath the polices noses.

To achieve this role you need to put down the following

Extras like Tattoos,Slits in eyebrows,birthmarks (in case of Art scenes): none

Name: Elva Lopez
Gender: Female
Nickname ( The name they go by and it will be their script name ) : Dollface
Age (the ranges are 18-20): 19
Personality: Scandalous, Seductive, Psychotic, Can be really mean when she needs to, Loud, Confident.
Nationality: Hispanic (Puerto Rican)
(Criminals can have normal hair colours)
Backstory (not too extreme if you know what i mean

Name:Alyssa
Gender:Female
Nickname ( The name they go by and it will be their script name ) : Ivy or Tequila or Whiskey(You choose)

Age (the ranges are 18-20): 19
Personality: She’s sarcastic, stubborn, anger issues, bad*ss, independent. She’s bold and outgoing. You do not want to mess with her loved ones.
Nationality: Polish, Slovakian, and Bohemian.
(Criminals can have normal hair colours)
Backstory (not too extreme if you know what i mean

Outfits: I’ll get to these soon.
Extras like Tattoos,Slits in eyebrows,birthmarks (in case of Art scenes): She has many scars on her body and tattoos on her arm as well on her back, too.

Name: Mystik Lunaa
Gender: Female
Nickname: Mystik or Lunaa (Your story you pick)
Age: 20
Personality: Mean to people I dont know. Loving and Caring to her friends and family. Attitude all the way but can also be goofy. Shy and insecure when it comes to talking/dating “hot” guys
Nationality: Mexican American
Backstory: Oh you know… parents who struggling to pay the rent, so they work like two jobs, So they’re never home, and when they are my alcoholic abusive father and mother are always arguing, so i joined a ‘clan’ for a sense of family and love and affection.
Outfit/Outfits:

Name: Denize Walters
Gender: Bisexual
Nickname: Izzy
Age: 20
Personality: sarcastic, crazy, not a listener but a doer, independent, sweet, intelligent, sensitive, mature, she has spanks or sass with her, she cusses, she has manners yet she can be rude, unserious most of the time (becomes really serious on serious situations.) She loves rock or metal music because rock music turns her adrenaline up, really weird that it sometimes freak people out yet she is also approachable because of her sweetness and kindness.
Nationality: Half filipina half american
Backstory (not too extreme if you know what i mean

No credits needed at the moment

Name: Sara
Gender: Bisexual (Female)
Nickname: Chola
Age: 18
Personality: Very hard to trust and when trust is given it means so much. Can be protective at certain times. And calm but can speak her mind if needed. Puts family first no matter what and can be snappy at times when irritated.
Nationality: Mexican
Backstory: Was an immature and stupid when she got mixed up with the wrong people who she trusted but sold her out to the police.
Details:
Skin: Olive
Face: Soft heart
Eyebrows: Thin angled
Hair/color: Beach wavy (black)
Eyes/color: Upturned bold (toffee)
Nose: Soft natural
Mouth/color: Classic (dusty rose)
Outfit: Punk Look Jacket, Black Shorts Onesie Top, Boyfriend Jeans, Black Beach Day Skater Shoes
Insta gram: @episoxdedesire

EDIT: Great, I’m up typing this at midnight again.

Name: Unknown. It starts with an S.
Nickname: Slayer.
Gender: Female, but doesn’t act it.
Age: Recently 18 (not my age IRL, close to it tho!)
Personality: Apathetic and somewhat sociopathic. Hard to feel sorry for others, but is able to put on good masks for social situations. She can act nice and calm towards authority figures, but swear and be violent in front of other criminals. However, her apathy can get in the way of her goals, and is severe enough to the point of where she’s seen people die, but never flinched.
Nationality: Slayer refuses to say, but she’s Polish and Mexican.

Backstory: Slayer is intelligent but somewhat evil, and keeps her past to herself. Few things are known, save for four facts she confirmed as true:

Outfit: Black school girl skirt, little black dress top, black leather lace boots, black touch of scotland shirt, and black high waist jeans.
Character Details:
Light body, mature round eyebrows, Jules’ hair, brown upturned luxe eyes, soft heart face, upturned nose, and dark-colored classic lips.
Extras: A small, very faded scar is on her left cheek from when she injured herself as a child. Her ears are pierced only once per side, her eyes are slightly rimmed from poor sleep and diet, and her right eyebrow has a single but slightly large slit.

My episode Instagram is @everythingslayer.episode, I believe. Or it’s @kordelsepterkun2. Either one brings up the same profile.

I’ll definitely use your character!

I want some freddie merury inspired on my character

I love this so much, I love freddie too!

I’ll totally use your character

Name:annie Mc
Gender:female (straight)
Nickname (The name they go by and it will be their script name) : Annie
Age (the ranges are 18-20):19
Personality: badass doesn’t take shit from no one and very bitchy and snotty
Nationality: British
(Criminals can have normal hair colours)
Backstory (not too extreme if you know what i mean

) : she was bullied as a child and came back being badass and getting into trouble with the police
Outfit/Outfits: 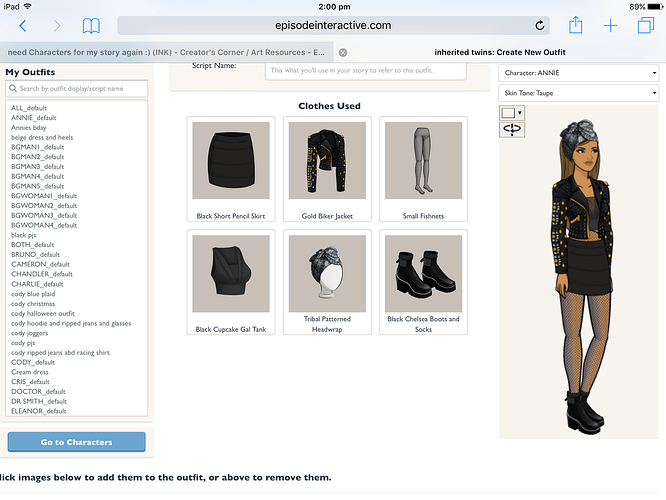 IMG_1280.PNG2048×1536 689 KB
Extras like Tattoos,Slits in eyebrows,birthmarks (in case of Art scenes)
She has loads of tattoos 2 lobe piercings one nose 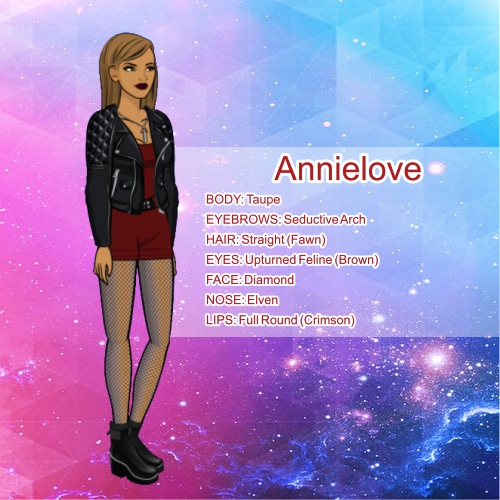 Also annie_stories_episode is my ig

P.S: if you get this joke, you’re iconic

I want to ride my BICYCLE!

Idek why it got age restricted on yt. Is it because their were naked women biking on the streets?

Name: Natalia
Gender: Female
Nickname: Natty
Age (the ranges are 18-20): 19
Personality:Extrovert, sarcastic, overprotective, bold, stubborn and has an independent attitude - Has funny moments but is super scaring but don’t try and screw her over
Nationality: Romanian/Australian

I read your story and I really like it.