I need help with my tapable intro it is glitching

So I made a Tapable intro and the overlays are misplaced or they don’t even appear on the screen, I am not sure what i’ve done wrong.

This is the first part of the coding 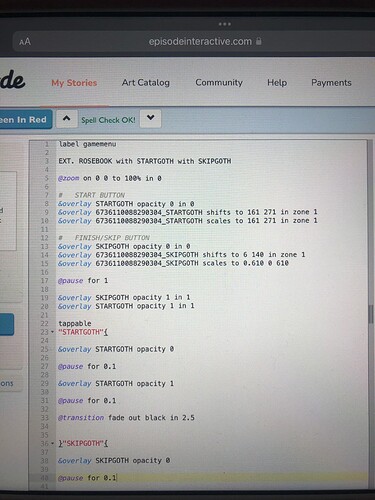 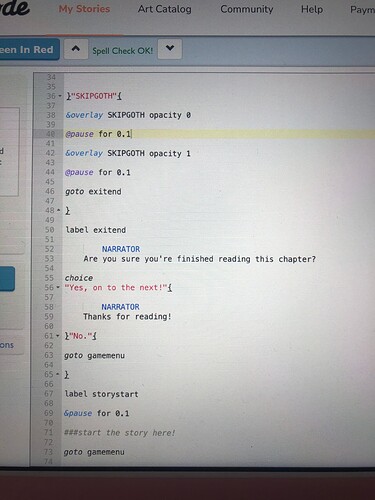 This is how it looks, i am not sure where the Start overlay went 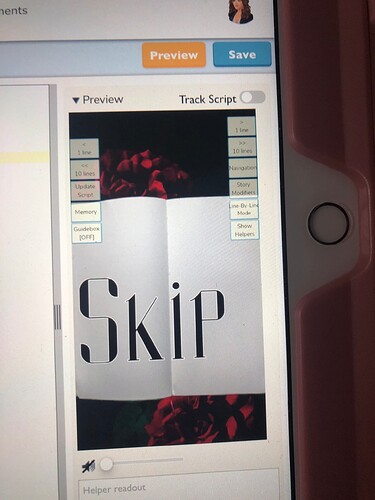 If you do know what’s the problem please tell me! This is my first story and i’m a beginner.

I would add:
@overlay STARTGOTH create
@overlay SKIPGOTH create
before the other overlay commands and if you do, you can remove the opacity 0 in 0 commands since the create commands both adds the overlays to the scene and makes them opacity 0 by default anyway.

Side note:
I’d also make the “opacity 1 in 1” commands have @ instead of & just so readers are forced to actually see the tappables appear first incase they try to tap without knowing what’s there.

I’d also change the contents of your branch because you have the overlay being opacity 0 and then opacity 1 and then if they tap it, it becomes opacity 0 again and then opacity 1 again when I think all you want it to do is direct them to the rest of the story. I would personally just have it become opacity 0 and insert a choice within it asking if they’re sure they’d like to start the chapter.
I’d also add a label so they can go back if they made a mistake.

NARR
Are you sure you want to start this chapter?
choice
“Yes! I want to READ this chapter.” {

You should also place the whole “Are you sure you’re finished reading this chapter?” at the end because with the way it is now, it will keep going even if they select the yes option.

You have to create the overlays before adjusting them

and then the rest of the coding you have of opacity, scale and shift
If the placing is what’s wrong try again doing:

Should be good to go!

Oh and quick note just an extra advice! Instead of putting

It’s much faster to code

Thank you for telling me this! I will try and change it now and I’ll update you when i’m finished!!

Of course!! I’m here if you need anything

Alright I’ll do that and post a picture of how it looks!

So there’s an error that appeard well actually multiple lol 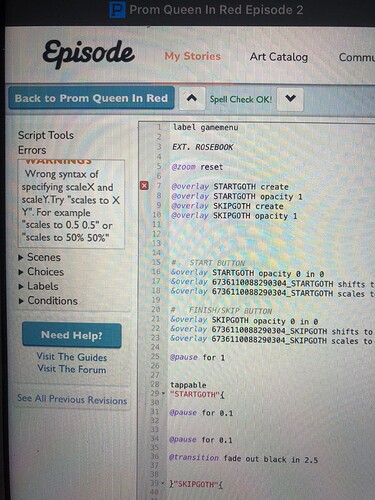 I think the error comes from the scales and shifts after that, sometimes it marks the wrong line

Try erasing those and trying again

Try erasing the spotting and adjusting them to the spot all over again, then copy and paste the coding between the lines of “create” and “opacity”

So I put the shift and scale coding but on the website it always shows different (the placing of the overlay, I am writing the story on mobile so I use the app to place things) This is the website: 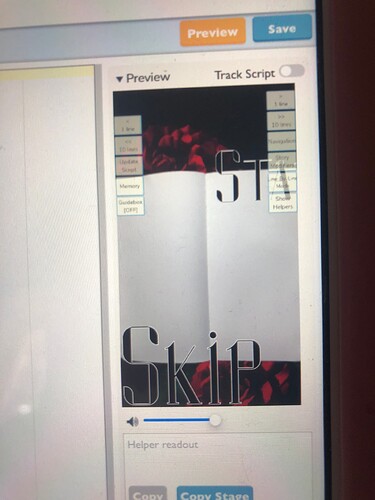 Also, your “scales to” command for the STARTGOTH overlay needs to have a different numbers format than shifting so like 1.000 1.000 for example not 161 271.

But your actual scaling numbers might be different in order to suit your screen/fit the zone. 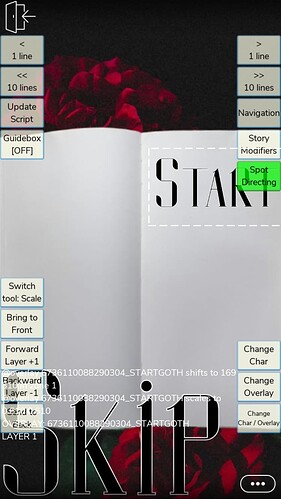 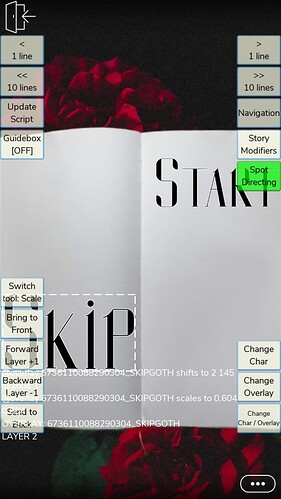 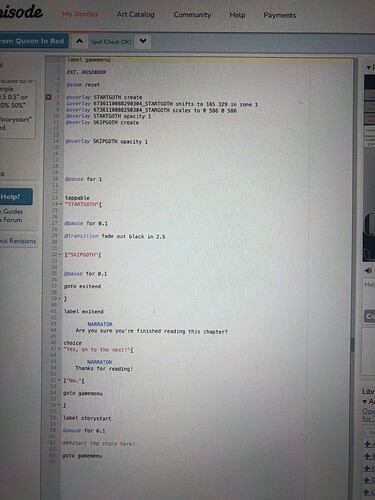 why don’t you try spotting through the computer?? they may have different settings and it shows different

I sadly don’t have a computer

Try adding decimals to your scaling numbers instead of spaces like this:
0.586 0.586

ouh you’re coding everything through your phone?