I need to say sorry to all of <Love, Hate>'s readers

I’m so so sorry to all of you

I can’t believe this things will happened on me

For those who have no idea what’s going on can click the link below​:arrow_down: 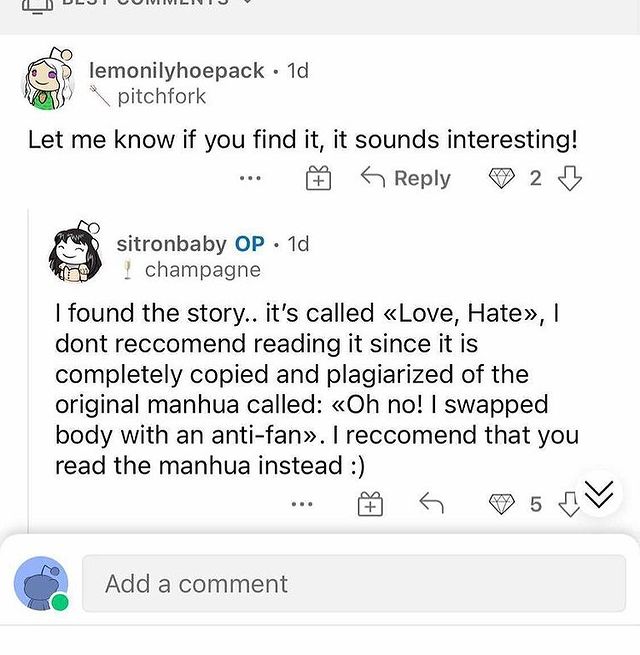 First of all, I’ve never ever read the comic before, I swear 🥺 because I’m not...

To avoid another misunderstanding by other readers, I’ll take down my story for temporary because I need to change all of the content of my story

I am so sorry this is happening to you. I tried multiple times I get ideas, and then later find out a story like it exist.

also copied, okay what about all the mafia once there all are copies of each other, there all spit the same romantick lines, arent they copying each other? just because a story have the same plot dosent mean its the same story.

I actually feel over a story some time ago, which was a lot like an anime, and I mention that to the author she said she didnt know it but was gonna look it up, never know if she did though.

also as a kid I played with dolls the plot of Hannah Montana before it even existed.

people will find corolation between stories, link where they dont exist, you dont need to change your story, you shouldnt,

what that person wrote was mean, listen I would call people out for plagarising too, but there is a diffrence between two stories have the same plot points, and copying the story.

noo I love your story so much

your words really help me a lot​:blush: but I still want to do some minor changes of my story

If you didn’t know the existence of this story before, then it’s not copying.

There are tons of body swap stories, most of which are the same, the person who wrote that comment should not have assumed you copied. For instance the story I’m writing it’s a supernatural story taking place in different world/ universes, I’m sure there might be a story that has a similar plot tho I have never read one like mine. I said that to say, if someone expects you to know every book in the world it’s unrealistic, and that would mean everyone is a plagiarist.

Another example is strawberry yogurt, me and my friends all re-call putting strawberries in yogurt before the 2010s when companies really produced it, that doesn’t me the company plagiarized us, they just coincidentally had a similar idea.

-Don’t let that person get to you (you a strawberry yogurt company and manhan is me and my friends, we all had a similar idea but one did it first.

I’ve read your story before and it’s amazing, as it should be !! Just because some individual makes your story look bad and wrong, you shouldn’t do too. Because if you believe that there is nothing faulty in your story, then don’t stop just because one claims something which isn’t true. Annddd it doesn’t mean everyone will think its plagiarised, as plagiarism is when you copy another story/whatever it is, but adding elements which other authors have, IS NOT WRONGG !! So please, don’t listen to the awful mail others send, they just can’t handle your effort and talent.

Do what you think is best, but quitting isn’t a good option <3

Thanks, and good luck with your story.