(I will add a summary at the end in case you don’t want to read all the details, this will be a long thread).

Makenna is the daughter of a famous rockstar, her mother is alive but lost custody and is currently living in another country(Makenna’s dad has influence and power, so he made sure his ex-wife wouldn’t bother him).

Makenna’s dad died during a concert in London (I’m not sure if overdose is permissible in this app, but I can change that), she was sad at first, but then she feels relieved because living with her father was chaos, she never had peace in her life.

The conflict of the story is that Makenna moves to another country trying to find her mother (I was thinking in a tropical country, maybe Colombia, Puerto Rico, or Brasil) and goes to live with her once she finds her (Makenna inherited her dad’s money so she was able to do all these things). Her mother tries to make herself look like a victim, but later on, the readers will find out that she is a horrible human being (Makenna’s dad was impulsive and Makkena’s mom is a control freak, that’s why they both hated each other, they are opposites).

The reason why Makenna was separated from her mom is that she always tried to control her and make her a mini version of herself, her dad was furious because his parents were like that and he wanted Makenna to be free (he wasn’t a perfect parent, not trying to defend him). Her parents always fought for power in the relationship, it’s sad because she was used by both of them and was hurt in the process.

The LI (Cruz) is a boy who lives in the same city as Makenna’s mom. He likes music (not rock, he prefers rap), doing activities at the beach, and dogs. Cruz is funny, outgoing, and has a strong personality. Makenna’s mom doesn’t like him and tries to separate him from her daughter, she gives Makenna excuses like “he is just like your father when I met him” and uses her daughter’s bad experiences to manipulate her, but in reality, Cruz is not like Makenna’s dad, her mother only uses that excuse because “she doesn’t want to lose Makenna again”.

That’s all that I got, what do you think? I don’t like copying other people, so please let me know if this is similar to another story.

Just to summarize, this is a story about a girl who moves to another country because her irresponsible father died and then deals with a controlling mother that uses her bad experiences with her father to manipulate her (Makenna was basically used by her parents to hurt each other when they divorced). She also can’t be with LI because of her control-freak mom.

(These are the inspiration for Makenna and Cruz, I like to find pictures that are similar to the images that I have in my mind). 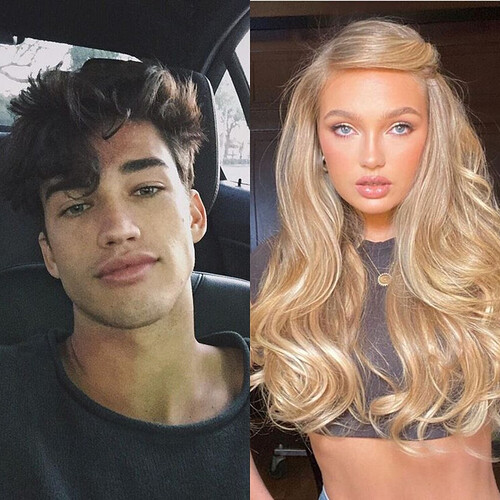 Sorry for my bad grammar, English is not my first language and it was hard to translate my notes.

I think it sounds good; you should give it a shot