You know that one moment where you finally feel like things begin to go your way and everything starts becoming clearer and you feel like you’ve finally accomplished the main obstacle in writing that you’ve been struggling with for years? Can’t relate.

I have been trying to learn how to code overlays by going back to the basics, but my tiny ass brain can’t even comprehend anything! I’m still stuck on how to make the overlay hand I created, move upwards. I was getting closer with my second attempt. But the hand didn’t shift upwards on my 2nd, it was already at the spot I wanted it to be at. But didn’t move up to it, like I needed it to. I’m really struggling here, if anyone can make this simple for me, or even teach me, LONG TERM (lmao jkjk…

) I WOULD LOVE YOU FOREVER AND EVER!!!

-So the 3rd attempt, the hand is coming out of a different direction. And then while it moves across the screen from the right, it stops at the spot I need it to be in, but not the way I’m trying to code it (which is from the bottom screen, up) Exhibit A 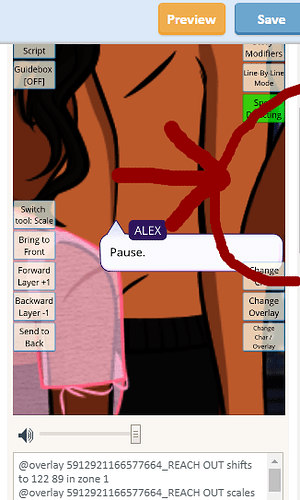 And after, I was trying to have a lightning overlay be on her arm, but have it flash but dont know how.

To have overlays move you need to shift them in # seconds

@overlay OVERLAYNAME shifts to ## ## in zone # in (number of seconds)

To flash overlays you can constantly change the opacity.

Feel free to change the numbers and experiment to see what works for you, as for the overlay mooving, I didn’t quite get what you wanted to do! Can you maybe explain it?

So are you trying to make her hand go up like touching his hand?

First of all when you create overlays its good to use & when you set the starting position and scale so it will not glitch.

So this will make your hand be on scene where you want it to be on the start.

And after this you move the hand (you can scale it too if you need to see it scale in time). You do not need to set again layer or opacity.
If you want it to move and scale in the same time you will again use & but this time you have to add time so we will actually see the movement

So to flash I would put in in that order?

Yes, I’m trying to make her hand go up and touch up.

yeah send me the whole script for it