In The Works: A Shelf About Bad Girls

Back again!
I made this thread, in hopes that Episode would ask for shelf suggestions on the forums as well as Instagram.

But in the meantime, I’ve started asking the question myself here. Comment down below stories you think will fit on this shelf… Please try and avoid listing ones that have already been on shelves in the past 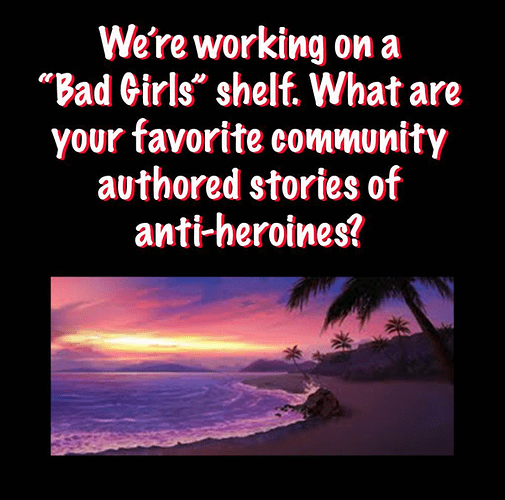 Since I don’t work for Episode, I can’t promise that any of the stories you recommend will be featured on the shelf, but perhaps the following could happen instead:

Bad to the Bone by Lee-Me Funk.

I mean you pick your gender, but like, tbh you can’t get more badass and heartless than the MC. You, the MC, are kicked out of Nirvana- and are now going to kill all the Gods / Goddesses (who happen to be your parents) before they eradicate humanity. You get a team all together, and - total plus ACTION NOT A ROMANCE plus no gangs. Take that gang stories dab

I’ll probably think of some more later today, but for now I want to suggest:

I’ve been thinking about this since yesterday because most of the stories I could think of were already featured.
I had two ideas, but I wanted to double check my shelf first. Then one of them, Lobita just got featured in October’s pick

So I’m gonna go with Guard in Rouge by @B612_Resident.
The MC of the story is a sassy, badass assassin, so be prepared for a lot of action and sarcasm.

Most of the ones I can think of have been featured already and so far I think two of the ones on the October Picks could have also been good for this also. Haha

Thank you so much! <3 You’ve been supporting me from the beginning. I really appreciate that

Well, I love your stories

And I also love your username, I’m a huge fan of The Little Prince!

Finally someone gets what that name means lol

I think I’ve found a really good fit for this shelf:
Aching For The Bad Girl by Olivia Carlson

Don’t let me have conversations with myself.

I still don’t know much bad girl shelves, by The Teenage Life of an Arsonist might fit. I read the story several months ago, and I recall the MC being like really tough? I believe she had just been released from jail in the first episode. However, I do know this has been featured before. Perhaps it’s time for a return?

damn, I love that story. Its perfect for this actually
The directing is amazing and its so hilarious

Chasing the bad girl is okay too, but its already featured so…

Nevertheless, if you want to read a story about a real bad badass girl, Not Interested by Madison fits perfectly.

This shelf will probably be out tomorrow… Any more predictions?

Omg Aching for the bad girl is getting featured! The author posted on her instagram story

Ohhh yaaay! Congrats to her

Assassins of Blackwood is really good! One of my favs