In The Works: A Shelf For Hidden Gems 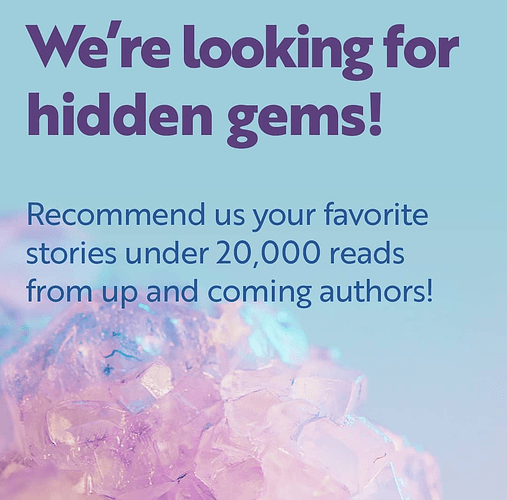 Episode is working on a shelf for hidden gems. What would you recommend? Must be stories with less than 20k reads.

Disclaimer: I don’t work for Episode so I can’t promise you that anything you suggest will get featured but maybe someone from Episode might see this topic and check out some of the recommendations anyway

i would recomand my own retrace. but it is pretty clichi

but also
fantastical criminals by saga instalment. amazing use of overlays
neverland by Maggy

both are fantasy and pretty good directed

can we recommend our own stories

Well there are many good stories that are underrated such as:
“Lovebird” by CERI
“Mortem Island” by Buddhalobes & Maud
“Six Feet Under” by Bebe Moore

You can, but I’d prefer if for this thread people also added other author’s stories too since there’s so many good ones under 20k

Ooh here’s some good ones I’ve stumbled upon on the forums:

Subverted by Epithet
Empress of time by Himeji
Living in the moment by Empress Vanessa
Paradise by Maggy
Intertwined by Kas
Princess of draya by Cece Marie
Solis: regnum fortes by Aedus
There’s more but I cannot remember them lol

maybe someone from Episode might see this topic and

…realise it’s easier to read through than the instagram comments? HAHAHA

• Mystery on Hanging Hill Lane by @Marshmallow_O
• Pine Hollow: Hex of The Three by @fcukforcookies
• Queen by @STEFFI01
• Outcast by @LovelyLoren
• Iridescent (LL) by @Indigosstories
• La Vida Lively by Jazzmine.
• Conquest by Emma Ashain
That’s all I can think at the moment

The last two are on instagram only I believe.

•Mystery on Hanging Hill Lane by @Marshmallow_O
•Taken: Dead or Alive by @Rose.xo_97
•Six Feet Under by Bebe Moore
•The New Boy by Molly.
•I know places by @flowersasthorns
•Mayhem by DAZE
•The Imperfect outcome by Kay

…realise it’s easier to read through than the instagram comments? HAHAHA

I agree, they should just move it here. It would look much more organized and less cluttered. just my opinion

. reading the comments is like trying to find your way out of a maze

Hahahaha, I think the Hidden Gems one is just the most popular theme, so it’s normal for the amount of replies to be crazy like that, but I really hope that someone from Episode does take the time to look through my threads for shelves. I’m bias obviously, but I think people give more genuine suggestions here than they do on instagram

I’m bias obviously, but I think people give more genuine suggestions here than they do on instagram

Ones that I have read and are gems:
Bad Behavior by @LiyahxWrites
The Salvation by @JuliaM
Outcast by @LovelyLoren
The Mystery on Hanging Hill Lane by @Marshmallow_O
Created by darkness by @Demon_Buttercup
Let it Rain by @jaeljean2222
Neverland by @Maggy
Joy by @abbey_b13
The royal princess by @mollie.stories
Fallen Angel: A quest for the heart by @miru
Bound by Blood by @ScarlettMills

GASP! Awwwww…it always warms my wee little Texas heart when I see someone recommends me T.T

Rewinded Life and
Benio both by Lia Lopez

Pine: Hollow: Hex of the Three by Elzbiet Zaleski

Too Much Baby Mama Drama by Lex (this one can’t be featured on the hidden gems shelf, can it…? BUT IT SHOULD! T.T)

The New Age by xXMagicalUnicornXx

Princess of Darya by CeCe Marie

(no, that smiley is supposed to be ^^ with an underscore in between the carets!! Whatever, look up the story and you’ll see LOLOLOL)

Aww thank you so much for recommending my story! You’re too kind xx

I’m honestly happy because I love the Hidden Gems shelf

This shelf should be permanent.