Informing about the grave of Bj 581

Sorry Mods, I don’t know where this fits.

Hello everyone! I wanted to make a post about a new thing I learned today! The topic of this is the Bj 581 grave!

This grave, know as Bj 581 or Bjorko 581, which was one of the 1,500 graves dug up in Birka, Sweden. This grave in Birka was found by Hjalmar Stolpe in 1878. This grave was one that really was something remarkable compared to other graves. Why? This grave held many items that were not common items but ones of Viking warriors, or what seemed that way anyway.

The burial was originally found by archaeologist Hjalmar Stolpe in 1878. Here is a drawing based on a sketch by Stolpe. 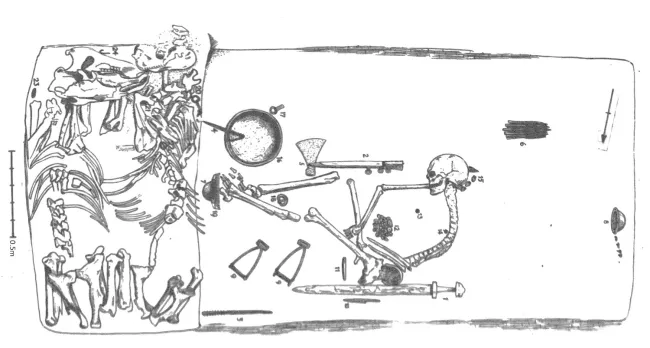 Notice the body (center) surrounded by weapons and a bag of game pieces. The bodies of two horses, one mare and one stallion, are on the left of the image.

The woman had a bag on her lap. This bag contained three antler dice, a polyhedral weight. two spheroid weights and 28 gaming pieces, the researchers wrote in the study, published online yesterday (Feb. 19) in the journal Antiquity. Above are a few of the gaming pieces.

It’s possible that these gaming pieces indicate the warrior was a military commander, but this idea is still speculative.

These signs, the weapons, horses, and shield, was enough proof to some to classify this person as male. Though, all of these people were wrong because it was later found out after examination in 1975 and 2016, that this ‘warrior’ as a female not male to contrary belief… In this grave, there were many things.

After all of the remains were examined and looked at by multiple research groups, the groups found something. The researchers found out that the dice and board were only owned by high-ranking military commanders in the Viking communities. While looking for more information on the Bj 581 grave, it was discovered that the Viking’s never wrote about themselves, the people that did though were people that the Viking’s looted and attacked. After thoroughly researching some of files, researchers’ found out an Irish text that was talking about a military commander named ‘The Red Maiden’ who was a woman commander, who managed mainly rules and was widely feared. This woman ‘warrior’ if you can call her that, was thought to be a male warrior since the grave’s excavation in 1889, the remains have been proved to be female by both osteological analysis and a DNA study in 2017. The study concludes the artifacts buried with the woman are evidence she was a high-ranking professional warrior. That conclusion has been disputed as premature by some archaeologists and historians who say the artifacts are not evidence that women were warriors in patriarchal Viking culture. This controversy has contributed to the debate about the role of women in Viking society.

Note: All of the information here are facts, but it is also late here so I will make sure to update it tomorrow when I read more about it.

Danielle this is good. I’ve never heard of her before.
But, I’m thinking that’s the woman who was buried is actually “The Red Maiden”. And yep, women and girls are always being underestimated.

I wrote that lol, but thank you.

Good. Let’s head over to our PM so we are not off topic.

Bump! I feel like this topic isn’t getting as much love as it should!

Thx for tagging me @Aquabelle! Hello mY aCadeMic tWin This is very interesting… Any sexist men can now see just how important women were and ARE