Ingrid Goes West is the most "cringe-y", but wisest movie I've ever watched 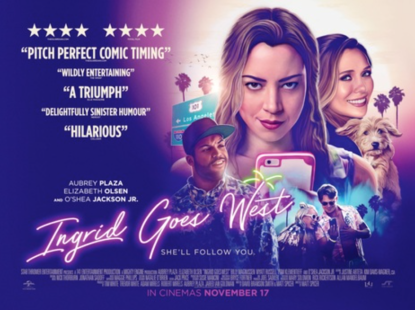 This movie is about a woman who has a social problem. Basically, she’s a stalker. What I like about this is that it shows social media’s effect (which is pretty trendy right now) on a whole other level. You go through 1h37m with this character that has a serious stalker issue. You see Ingrid Thorburn – who is mentally ill – go to great lengths to become fiends with a random California instagram “model”, Taylor Sloane. For like half of the movie, you see Ingrid do very shady and inappropriate things to befriend – more like become – a random stranger who has the perfect instagram life. You go through all this embarrassing – some even troubling – scenes, only to find out that it was all a lie. Taylor, who Ingrid so desperately wanted to be like, just put up a front of Instagram that she led the perfect life, when in fact, she didn’t.

In this movie there is such a good lesson. It reflects on people wanting to follow their influencers’ trends, when it’s all lies. It also touches mental illness and goes pretty deep into the subject, and that is what makes this movie very good. All along, you feel like Ingrid is just crazy and you can’t bear to see her do all these terrible things and you just want her to be herself, and in the end, you realize that she knows there is something wrong with her and “She doesn’t know how to fix it”, as she says. A few minutes before the end, we get to see a true side of her that touched me deeply. The ending is what is absolutely the best, because this character that you made out to be sick – even awful – is just a person in need of help who has it, but can’t reach for it.

There is also this character called Dan in the movie, which is my absolute favorite, because he teaches Ingrid such a good lesson, which is to be yourself and love yourself. He also says (he doesn’t literally say it, it’s just what you get from it) that if you don’t love yourself, it’s okay, because others do. But even if you won’t allow them, they still care. All throughout the movie he is so patient with her and he’s an absolute angel.

What I loved the most about this movie is that it touches subjects that can be commonly seen, mixes them, and touches something not a lot of people have before. It make you “relate” to Ingrid on so many levels, all the while feeling so ashamed of her because of her actions. I highly recommend you watch it. It can be hard for some people though.

Why I’m talking about it here is because I want to spread a good message. I think not a lot of stories on Episode touch mental illness in this specific way, as it is a very mature subject. But I think it should change. Maybe things like these taboo is understandable, but at least we should spread the message that this movie gives:

Be yourself and embrace it. If you don’t, let others do.