Not a problem at all

The first gem choice is this:

NARRATOR
Does this appear as a gem choice?
choice (gemchoice) “Yes” {

And then in future episodes I will code choices like this:

But seriously I was thinking about this because I thought you couldn’t put choices in if statements.

To be honest, as a reader, I too dislike gem choices. But as a writer, especially the ones who wants to earn, having gem choices will definitely enable payments to writers.
But it depends how the author does it. The way @amberose does it for instance, is really noble, and this makes the readers feel less pressured when choosing a gem choice.

Actually I have a doubt on that. I did come across this 2 gems for less than 10k reads stories etc, but nowadays, I see almost everyone with gem choices uses 15 gems per choice. Are these 2 different matter?

Thank you for the coding script.

I was just thinking on how do you do that

When I was following the book “Psychotic Lover” (a shelf feature) it was the first time I could see gems. And it was a choice that the author coded. So, it started off with 2 gems and then it changed to 15 gems, (now a 500k read story) as her story started getting noticed from the shelves.

Oh that’s odd. I had not crossed that little gem option personally. I’ve been doing a few R4Rs with new authors and stories, hence they only have hundreds of reads at that moment. When their gem options appear, it always shows 15 gems.
Now I’m confused

I thought you couldn’t put choices in if statements.

Thank you for the coding script.

I was just thinking on how do you do that

No problems. I’m a really big fan of cheating the system so I’m always keen to encourage others to do this lol.

Also with regards to pricing, after the last update to android devices, I’ve noticed that all gem choices are priced at 15 now regardless of the amount of reads a story has

sorry, if I sound invasive, this idea feels confusing that’s all, what happens when someone codes long choices? How do you refer to the else? That would take them a whhhhhillllllleeee.

If you have a decent amount of readers already it might be better to add a choice to support the author and later on consider using it for extra scenes.

I’m not too sure what you mean but maybe a screenshot of my script might make more sense? 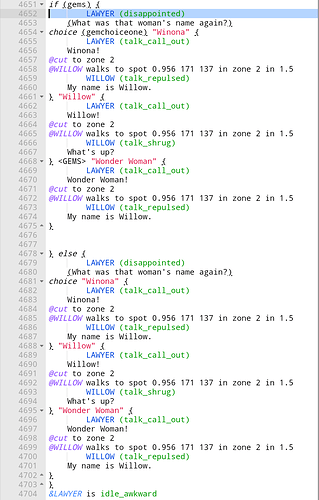 I am deciding on it. As of now, I have 3 completed stories, and my total story reads are about 13k. It might take a while till I am able to reach the minimum requirement for payment.
I will look into this. Thank you

100k times 15 gems in 2 months, meanwhile the author doesn’t get a single penny? I wouldn’t call it anywhere near a fair price. Who knows how much money they make from that many gems spent? So many great stories don’t even have 100k reads. This policy disgusts me from the very start.

Honestly, to me, 100k reads is quite farfetched for me as well. I’m certain there are more great stories out there who also faces the same thing like I do, and we are doubting on whether to enable gem option.
But, I guess its worth a try. Its quite a big difference (400k reads of difference), by just coding in the gem option.
If the gem clicks are less, as you mentioned, at least we will know how our reader’s choices are. I am also worried about this consequence as I am just a small author.

I just can’t consider the writers payment program as a goal. It’s too unfair and unrealistic, and honestly won’t be possible unless you get amazingly lucky or featured in a shelf (even event shelf stories lately only gain a few thousand reads when they’re featured). From what I’ve seen here, the pay isn’t much either to make a living from it unlike youtube

Personally, I was against all gem options whether they were simply used as a donation to an author or used for an extra outfit in a story. I’ve been an Episode author for 4 years now, and now, I can say that I’m really grateful for these gem options because I can incorporate them into my stories. To me, it’s an easier way to unlock the payment section because you only need 100k gem choices read. Therefore, I used gem options as support and donation for readers to donate to me. It’s not really necessary, but it is a great tool for authors to use if unlocking the payment section is an ultimate goal for them; plus it’s a bit quicker to earn than 500k general reads in 60 days

Moved to Episode Fan Community since this is more of a general discussion thread and not about story feedback. Make sure to check out our Forum Tutorial for more info about creating topics, and feel free to PM me if you’ve got questions.

meanwhile the author doesn’t get a single penny?

Authors already in payments get a bonus for adding gems.

100k reads is quite farfetched for me as well.

I believe a lot of authors have gotten into the program this way, actually

the pay isn’t much either

It’s not, but you could live off it depending on where you live and how many reads you gain in a month. (So, a very very small portion of users could actually live off it.)

whether I should add gem options for my stories.

Before, when no one could have seen them, I would have told you to go for it. Now- it’s obviously up to you. If your story takes off or if you get put on a weekly shelf, having the gem choices will help you get into the payment program faster. It’s not a lot of money, but it’s obviously nice to get something when you’d usually do this for free.
As long as you don’t make the gem choices annoying, I don’t think it’ll bother most people? I have them in my newest story and so far no one’s complained as I mostly just use them to add points.

I totally understand your point of view. Ultimately, no one likes to use gems. Thank you very much for your insight. Its something for all of us to ponder upon.

I totally agree with you too. As long the gem options aren’t annoying.
Thank you for your insight on this