Is it against the guidelines to have racist characters? (and show them in a bad way, of course)

One of my characters is jewish, and in one of the scenes she gets into some kind of incident and a person makes an anti-Semitic comment about her. Because anti semitism is a real problem, and it’s something jewish people really deal with I don’t think it should be a problem since I don’t present it or show it in a good way of course. (And I’m jewish myself lol) however, I’m not sure if this kind of dialogue matches the guidelines. This question goes for racism comments as well because of a skin and stuff.

I think it’s fine, like the post before me said as long as it is presented as wrong it should be ok. I have a character like that in my story too.

I was advised it’s better to avoid it.

I don’t see how it’s wrong, because antisemitism is a problem that exists in real life (unfortunately). Same with racism (I read a story whose authors included a character that was racist towards the MC). As long as you don’t add racist and/or anti-Semitic characters to offend someone else (e.g: if you want to make an Afro-American or dark-skinned character who’s being racist towards someone else (towards Asians, for instance), don’t do it to offend the Afro-Americans or dark-skinned people at all), then that’s okay.

So don’t be afraid of having racist and anti-Semitic characters.

I had a scene where two men where commenting on a skin color and I was asked to remove it, so it probably depends on contex + things said above

As most have said in similar threads, when in doubt you can submit a ticket to Pocket Gems and they’ll give you an answer.

As a Jewish reader, I feel like I might be able to contribute to what may be found as anti-Semitic content in a story. I’d say:

Honestly, just don’t glorify it. As a fellow Jew, I know you won’t, but I think the issue is glorification of bullying (or racism, sexism, homophobia, transphobia, etc). If you have an idea of what the dialogue will be, you can send it and I’ll give my input— only if you’d like, though!

When the new guidelines were announced, I understood this line:

No hate speech in any form on the basis of (but not limited to) race, ethnic or national origin, religion, marital status, disability, gender, age, sexual orientation, or gender expression

to mean you couldn’t include anything, not even if you were using it to be educational. But in saying that, I’ve seen plenty of stories that have passed review that have had scenes where a character has said racist or homophobic things in the story, so then I doubt my understanding of the guidelines is accurate. I think the best thing you can do is submit a ticket and ask specifically if [line # in episode #] is allowed.

Hmm, but would you consider racist remarks as hate speech?

Since directly after it says “in any form”, then yes I would. That might not be what episode actually means, but I’d rather be safe than sorry

I’ve sent a request, let’s see what they say.

So this is the answer I got. 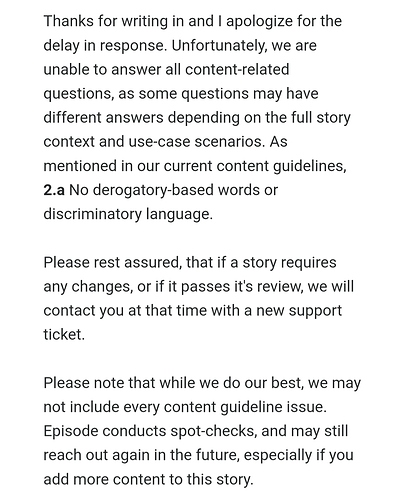 What does that mean? 0.o

would you consider racist remarks as hate speech?

That is exactly what it is. In order to be racist you must have hate. A racist comment would be hateful and therefor hate-speech. Just in my opinion 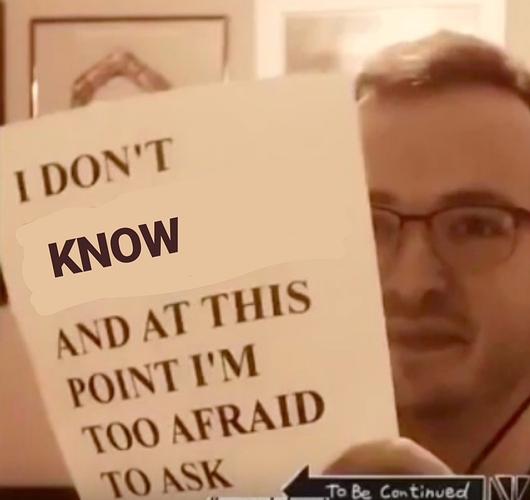 So according to the guidelines I can’t include them EVER no matter the circumstances?

Don’t quote me on it because I only know forum related guidelines. But if you want to make 100% certain that you won’t be breaching guidelines I would simply not include any racist comments or hate speech. That’s really all

I’ve send them my two of dialogues that included such remarks. At first I understood it as “It really depends on the context” but then you have them pointing out that guideline so idk anymore. In my case I guess it wouldn’t be hard to change the dialogue since I used it more as being educational and not something that is heavily involved in my plot and I wasn’t going to include more in the future anyways.

I have read many stories which had homophobia as part of the plot and they were all fine (been on shelves and everything), so I’m pretty sure it depends on context of the story and I also think it’s upon the reviewer who reviews your story and how they interept things.

@shaharPie you’re jewish and I’m sure you know more about anti-semitism than me, I think if you don’t put any slurs it should be fine. If they think it’s not appropriate according to the guidelines, I’m sure they will let you know.