Is it bad to have an MC that looks like another author's character?

I already created mine and then realize that she looks “basic” and even look alike to other characters. I didn’t intend to do that, I realized these things by showing pictures of her in the forums and reading some opinions. I didn’t want her to look similar to others, it just happened and that’s even common in real life.

I tried to focus on her personality, goals, and backstory, if people don’t like her looks they can change it with the CC. But I want to know your opinions, should their appearance matter that much? Isn’t more relevant the plot?

I understand that some people hate the basic MC who only cares about the LI and doesn’t have a personality or goals, but imagine complaining about something you can actually change…

Honestly if you add cc I wouldn’t worry too much about it (as long as you aren’t miss representing an ethnicity)
The most important thing about a character is the actual character (as in their character development, traits, ticks, etc)

As @Celestial_Night said what I wanted to say

As long as you use appropriate features for that race their shouldn’t be an issue and you are most likely going to make a character that looks like another authors and CC will let people who don’t like it change it. Focus on the actual storyline rather than looks then you can change it later.

The only problem is that I used big lips with most of them and some people don’t like that. I have plump lips and I’m a Latina (more on the pale side), I’m tired of people finding my features “fake” or “basic”. The worst part is that they often use that kind of lips with the one dimensional MC or the mean girl, and it’s frustrating.

It’s horrible because these people are rude, I struggled a lot in my teenage years because of my lips and it’s sad to still see people complaining about that. I want to have complex characters with big lips because they can actually be nice and interesting, it’s a way to fight against these stereotypes. I got inspired by real people who have plump lips (Irina Shayk, YooA from OMG, Rosie Huntington-Whiteley, etc).

And I don’t want to be rude… but I think most of these people have the “not like other girls” type of mentality. I prefer to have a basic looking character that’s memorable and interesting than a boring “not like other girls” who reads, hates the popular girl, and that kind of stuff. I want to use this picture because it’s funny and explain my point

I don’t know what is wrong with those people, like why is being “basic” a bad thing. Like diversity is good but if the author doesn’t imagine the character like that then they aren’t going to put as much effort into it. There is a line like using black hairstyles on white characters but I don’t think we should see being “basic” or having full lips seem like a bad thing. I feel this genralising makes people self conscious about themselves. A lot of stories have CC if you don’t like the “basic” look then change it.

There is a line like using black hairstyles on white characters but I don’t think we should see being “basic” or having full lips seem like a bad thing. I

I understand that using afro hair on a white character it’s bad (except if it something genetic and the author explains that), but it’s not okay to be mean with others. Imagine seeing a character with a large nose and saying “that’s not okay!!! larger noses are prevalent in certain ethnicities”, that would be even racist

Of course! This is when people use them for stereotypical clichés which is completely wrong.
I will note that I have many Caucasian friends with naturally full lips though, so it is a feature found on some white individuals.

I was one of the people in that thread that advocated against “basic-looking MCs”… as they were called. I don’t like the terminology, I just find certain feature combos unoriginal at this point in time, with the Episode community that’s grown and the majority of which creating characters that look like that.

I believe it’s a phenomenon recurrent in artists too which is called ‘same face syndrome’. Like I said in previous answers of mine, it’s mostly due to seeing the same patterns over and over again.

It depends on where the character is from, what their parents look like, etc. For example, in Italy (predominantly white European country) there are people with plumper lips, but they’re not as plump as ‘Full Round Pouty’. As in, I have yet to see an Italian white girl with those lips.

If your characters come from where you’re from, and plump lips are the norm for everyone, go ahead and use them! I’d just say, for the sake of diversity in character design, try to make each one more unique using different features. It’s okay to show appreciation for a particular facial feature in the portal, but overdoing it would leave other features unappreciated.

But anyways, if the character has CC at this point I don’t see a problem. Especially if her personality is well planned.

I actually do think it matters. Every character I’ve written is a different ethnicity to show diversity. Despite me adding full CC I still put effort into making my character represent from wherever they are from. Whether they are from India, I have my character speaking a language used in India. Representing their culture makes the character feel more alive and you get to connect with a wide audience. I have gotten mail from my stories saying how happy they were to see someone represent where they are from. Despite character development being extremely important, their diversity matters just as much. Also because I used CC I make sure their family members are not CC so that they are fully shown to represent their ethnicity.

Also knowing your character’s ethnicity can help with character development. Ex: What languages do they know? Where are they from? (they have to be from somewhere right?) Are they religious? One of my characters, they are Bengali, so I make sure to have them speak some phrases and show parts of the religion. For example, her mom is Muslim. How is their environment like? Really fully getting to know your characters to the best you can to help truly express them in your story. I know the height, birthday, fears, occupation, religion, sexuality, ethnicity, etc. of my characters. It helps me bring my character to life.

girlie, i hope you know that nobody is speaking bad about big lips and especially not your lips, we are talking about the overuse of big lips in MC’s every single time.

In my opinion, I wouldn’t mind too much, if it was a really good story and there was either CC or good diversity. Though, MCs tend to look a bit repetitive lately. I like to have characters that are unique looking.

Do what you want. It’s your story, and having an MC that’s similar to a bunch of others isn’t bad, it just means a bunch of people are going to like the way they look, which is a good thing.

However, let me also add that although it might no deter me from reading for the most part, its getting tiring seeing the same face all over episode. Unique character will pull people in.

Yes, that’s it. It honestly could be any other feature in the portal and if it’s overused it’d still look annoying. Like, unless most of your cast has the same feature(s) it should be fine. 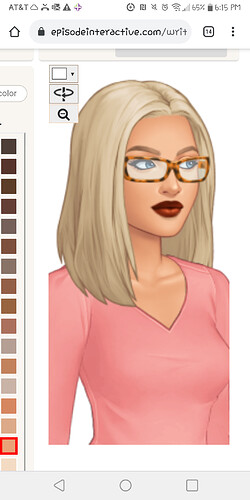 But in all seriousness, I really enjoy reading your view point on things because it’s true

If your characters come from where you’re from, and plump lips are the norm for everyone, go ahead and use them! I’d just say, for the sake of diversity in character design, try to make each one more unique using different features. It’s okay to show appreciation for a particular facial feature in the portal, but overdoing it would leave other features unappreciated.

The saddest part is that I only have one white MC with big lips, the others are from South America and Japan, so it’s not weird to make them look that way (I inspired in Mina Myoui and YooA while creating Rina).

Juliana and Kel are originally from Chile, so I think I know my own country so much better than these people, I’m 100% sure that woman like them actually exist in real life. Anyway, I have many main and secondary characters prepared that look very unique and represent their ethnicities in a proper way. Here are some of them, I think they are gorgeous. (Minji has dyed hair but it’s part of her personality) 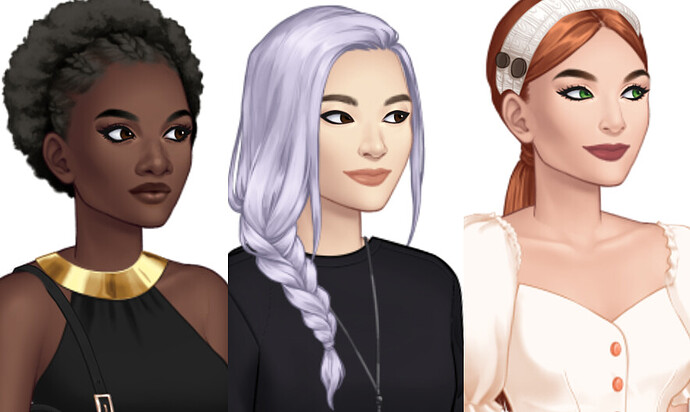 Representing their culture makes the character feel more alive and you get to connect with a wide audience. I have gotten mail from my stories saying how happy they were to see someone represent where they are from. Despite character development being extremely important, their diversity matters just as much.

As I said, I include a lot of characters from other ethnicities because it’s common to see a lot of cultures in one country (except if it is a very small country). I’m worried because two of the MC’s friends are African American and I don’t want them to be the typical black best friend trope, they are unique and they have a huge role in the plot. I didn’t notice that until I started working on the portal. But continuing with the topic, later I will have more diverse MC’s and LI’s, so they will not look “basic”.

I know the height, birthday, fears, occupation, religion, sexuality, ethnicity, etc. of my characters. It helps me bring my character to life.

Yes! And that makes them unique. I try to include tall, average, and short girls in my stories because it’s not the end of the world if they are the same height as the LI. Also, short guys exist in real life, not every man is 1.80 M.

girlie, i hope you know that nobody is speaking bad about big lips and especially not your lips, we are talking about the overuse of big lips in MC’s every single time.

But calling a feature basic just because it’s common is pretty offensive :((

Idk, maybe I took it personally because it triggered my bad memories

i’m just sick and tired of people using full lips more on white characters other than people of colour. i’m ok with people using that feature, but predominantly using it on people who don’t usually have that is not fine.
the same is with unique eye colours- i’ve seen more people of colour having “natural” blue eyes rather than darker shades in stories.