Is there an idle sheepish animation?

I want to convey that the character is awkward but the IDLE awkward animations make them look like they’re sad. 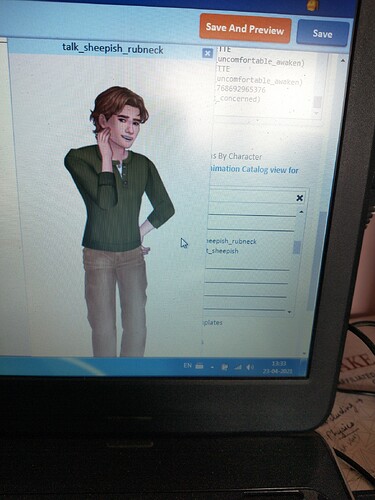 This is the animation I’m talking about but I want it to be just idle and not talk.

No, unfortunately there ain’t any.

Naa that makes you look serious and sad😭

aah it’s so hard to make characters look awkward around a love interest. It can only be done in dialogue lol.

(i searched it in the male animations and it looks exactly like what you described it)
if it was a female animation, i dont think there is one :((

Well, what about this one? flirt_coy

OMG YES i just checked too!! Im so sorry I waa checking the female version of the “idle_awkward_scratch_loop” thing thinking animations are same for both genders!

Thanks so much​:heart: ahh im dumb

thanks fr ur help tho!!

It’s alright!! And honestly big mood ToT makes me sad when certain animations aren’t the same/similar to the other gender-