Hey. I’m writing my first episode story and so far I haven’t had too big a problem until I tried to create a dressing game. It keeps coming up with the error ‘label doesn’t exist.’ 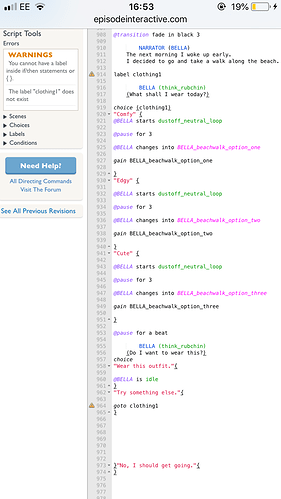 4B776BC5-C75E-4B66-BE70-3A54DB14DC28.png750×1334 158 KB
I’ve looked on the forums and I’ve found nothing that helped. I’ve even tried another script and many different labels but the same thing happens.
I understand that there’s another error about not being able to have labels in choices but when I preview it in the episode app, the dressing game plays until it comes to the point where it should replay. I don’t know whether having it in the choice is effecting it but it is necessary to the story.
Please can someone help?

(This is my first time submitting something on the forums so I apologise if it’s in the wrong area).

I tried this but is there a way to create the label (out of the choice brackets) that won’t appear elsewhere in the story?

I feel so silly asking but where do you actually put the dressing game?