Can you show the script? Otherwise it’s not possible to tell what’s wrong. 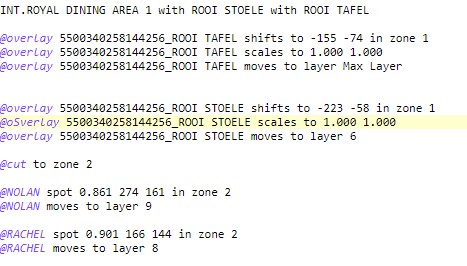 You wrote @oSverlay instead of @overlay while scaling the overlay ROOI STOELE to 1.000 1.000

No sorry that was just when I took the screenshot, It was correct before then. I did remove the S… still same error

Remove the word “moves” when shifting overlays to a layer.

And I may be wrong but is there anything called max layer in Episode? I’ve never seen that.

Thanks let me try that

Me neither, I’ve never used max layer before, that’s odd. Maybe try removing that and use a layer number instead?

Yup. Just confirmed it with my script.
@Lizelle there’s no valid layer called Max layer. So you need to give a layer number.
Example:
@overlay OVERLAY_NAME to layer 8

Whoa. But it’s not working for me when I’m using max layer in my script

Great. You can put any number as layer number. Even negative numbers. (: