The Art of Word | Teresa

Final Thoughts | The Art of Word by Teresa

You wanted me to focus on plot and directing, with an audience in mind who is of similar age. Since I don’t know your age, I assume you’re younger than me and closer to the target audience of 13-18. I think your flow could be better, but it’s balanced well with the parody and fourth-wall-hitting main character. For example, in a scene with the parents dropping off Willow at camp instead of her just appearing at camp, but then she makes comments like O.O damn I got here fast, and hits the fourth wall so it balances out. As for the plot, I found it a little hard to understand at times but understood more as the story progressed. You had a lot of choices, most of them being dialog but it was entertaining and how creative your responses were. I think adding information about the choices at the start of the episode would help. If you did, I apologize, I must have missed it trying to read all the readerMessages (or if it was a readerMessage, I didn’t catch it because I was reading the dialog). I think that you should consider mentioning that your story is a parody in the summary if there is space. That way, it really stands out in the comedy genre, as there aren’t too many parodies out there.

I only saw the occasional directing error, mostly with laying in Episode 3 with the map behind the character.

Thank you so much for this detailed live thought

I’ll make sure to fix the mistakes you’ve pointed out!!

Additional Information that helps me

Total Episodes When Complete? : 10 - 15
Part of a Contest? : No
IPAD Friendly? : Slightly?
Who do you think your target audience is? : Teens
Anything you’d like me to focus on? : My grammar & story pacing? Thank you so much <3

Giving this a little bump~

My Dear Prosecutor | By Nurella

You have a good story going on. I’ll admit, I was getting worried that the first three episodes were going to be all flashbacks but the story picked up and entered its main plot halfway through Episode Two. It’s unique in the way the prosecutor is solving the case (but this wouldn’t be the case in real life), yet it’s your own story and it doesn’t need to follow the real-life world.

I did mark a small handful of un-typed out numbers and text-lingo because it’s a pet peeve of mine. You are not obligated to change anything, but perhaps keep it in mind while writing future episodes - as there was this poll done a while ago on the forums, which asked people what they preferred. While most did not prefer it, a good amount of people said it did matter to them.

One last suggestion I have is to be mindful of how the background characters look. I have a pet peeve with default outfits, which I occasionally saw. This likely won’t bother the average reader but what will is when the background characters have bright-colored lips on dark skin or natural dark-colored lips on lighter skin. I’m letting you know now because the meanest fanmails. I’ve ever gotten are around this - therefore, I go in and do minor touch-ups after I use the random character generator.

Thank you so much for your thoughts

I really appreciate it!

And yes, there will be a plenty of court scenes in the upcoming episodes. But these scenes will be a little different from the common law. I’ll write the court scenes according to the legal system in Europe. (continental european law) / (Civil law)

I mean, there is no such thing as a jury trial in my country, and judges take a more active role in court proceedings. For the record, I’m not a lawyer yet. But I’m a law student

Once again, thank you very much for reading and sharing your thoughts

Thank you for your patience, I’ve just been really swamped.

For the semi-friendly IPad choice, you could do a choice [shouldPaginate] which makes the choices look like this: 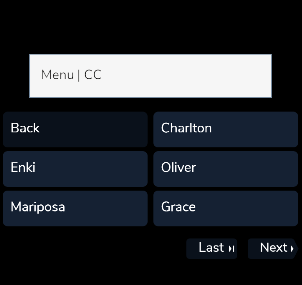 I think that your grammar is good, just my pet peeve of untyped numbers/Mr/Ms here and there.

I think that your pace and character development are wonderful. As mentioned earlier, I really enjoy seeing the unhealthy relationship that the MC is in. I often see the MC still recovering from an unhealthy relationship, or it’s for dramatic effect. While the relationship has drama, I believe it adds more to their character development instead of just being like ~aahh drama~. For example, how they can go one moment in love and the next bickering. I look forward to seeing how the MC grows with the help of her friend(s).

Thank you for your patience,

You asked that I check on your grammar and story pace - and for grammar, I only saw one mistake in Episode Two, other than my little pet peeves. For story pace, I personally think it’s a tad on the slower end because very quickly, the first and a chunk of the second become more like the backstory to the main plot. However, your story is very narration heavy, which makes sense to draw out the scenes and really give each scene some depth. Therefore, I’m optimistic that Episode Four is when the drama gates flood open and all the groundwork and foreshadowing you’ve implied in the first three episodes is going to make a thrilling chapter.

I think your narration is beautiful. I believe that it’s a great balance between the character’s inward feelings / outward feelings. Especially how it’s paced out. For example, the shorter dialog gives a thrilling and anxious feeling, also while zooming in - music/sounds too! It’s definitely something I would consider flexing when describing your story. It’s something I’ll be mentioning to my readers when I share your story.

Thank you so much <3 I really appreciate you for giving me your feedback <3 !! Much Love <3

Hi, may I request again for my other story?

Total Episodes When Complete? : story is completed
Part of a Contest? : Yes, Digital Dating Contest
IPAD Friendly? : I think so…
Who do you think your target audience is? : teens to mid 20s
Anything you’d like me to focus on? : plot😊

I think that your plot is unique and sweet. It’s definitely a tad on the faster pace side, but that’s expected for a three-episode story and I genuinely believe that you stretched it as far as you could without tediously long episodes. I am not sure what else to say here: My favorite character was a differently matchmaker grandma.

One thing that definitely stood out to me is the music/sounds you used in your story. Now, this is a complete suggestion but something that I really like in stories is when the music fades in/out with the transitions. I think that it would benefit your story, as sometimes when jumping from scene to scene (and therefore music to music genre) feels very abrupt. This is an example of how to code if you are interested.

Thank you so much for this!

And I’ll check the fade in and out of the music.

Thanks for mentioning that.