Thoughts on this new featured story?

I was a big fan of the original and recommended it constantly. It is probably the first Episode story that I think actually deserves to be featured, in terms of plot, directing and characters it is a great story. I’ve seen some screenshots of the featured version which seems to have been…Well, changed a lot- and not for the better. I still do recommend the original if anyone is looking for a story to read.

Yes, not only is the title actually meaningful for once and not unreasonable ones like In My Bed, Hot Roommate, My Teacher, My Gangster. The story itself is actually powerful with a great message, and there aren’t any mean girls. Vanessa has a crush on the love interest, but her thoughts reveal a nice and soft character that just wants to be with him. Thank god, good job with this selection, Episode.

This is one of the sweeter stories Episode has ever featured (on the lines of Rebounding with Bad) but the featured story’s effort does not match the quality it should have.

I’m playing the Cora (female LI) branch, and there are a couple of name typos (expected for Episode-only gender choice stories but okay). Besides from that, one BG character in the cafe just walks in place.

Actually, now writing it, even the errors (the ones at the top of my head) aren’t egregious. The spot-directing for the female LI isn’t shabby too. Just that her outfits for the movie are a bit sketch.
In general, Cole/Cora is also an idiot, but understandably a love struck idiot, and it’s honestly refreshing to see one of those who aren’t really problematic.

In general, Cole/Cora is also an idiot, but understandably a love struck idiot, and it’s honestly refreshing to see one of those who aren’t really problematic.

Relatable with many other stories as well! I love how this story doesn’t mention mean girls that act randomly as HBIC for no reason. Vanessa, the redhead in Episode 2 you see dancing with Cole/Cora, is obviously in love with him/her, she seems more heartbroken than mean to be honest. Anyway, I think this story is almost as likable as Earl Grey Tea’s IMAM. It’s been a while since we had this type of high quality stories on Episode.

I agree with Lilly. I read the original around the time missed connections stories were out, I believe? And I fell in love with the first three chapters. I eventually stopped reading either because I was behind or I kept getting refunded a pass. Either way, I’m glad episode featured a decent story for a change. Though, they definitely butchered the directing. I mean, it’s as easy as copying and pasting… yet they still find a way to add errors to a story that doesn’t have errors in the original. 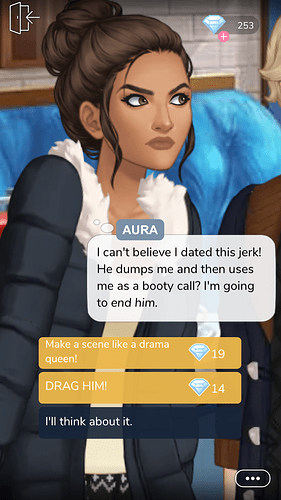 I’ve read the first episode of both this and the original, and they seem pretty similar except the gem choices make the featured version slightly worse. The above choice? I have to pay gems in order to tell Aura’s ex she doesn’t want to be his booty call? Not cool. Also when I didn’t pay gems for the premium hairstyle, it changed her hair into a sock bun randomly, so now she has long, straight hair no matter how you CC her. Finally her tattoo keeps changing. The new planet tattoo is super cute, but it keeps switching out for the old floral torso tattoo for some reason. It’s like they took all the pages of the original story, shoved in a bunch of extra pages at random, and slammed the whole thing closed in a filing cabinet without getting all the pages in order first. They just turned it into a bit of a mess.

I haven’t liked a featured/official story enough to purposely spend gems on it in a long, long time.

I don’t bother reading them anymore

I used to read them to collect gems, but when I stopped spending gems, I stopped reading. I usually only do the first 1-2 chapters now. I might actually read this one, though, since a lot of people seem to like the original. I’m curious.

The guy looks like an off brand Justin Bieber. And Justin himself looks like Walmart so that says a lot.

When I was playing a beta of this game, I chose the gem choice to adopt a pet in order to get in the ball, but for some reason it didn’t register and MC and her friends had to flirt their way into entry like with the non-gem choice.

That happened to me too. Also now I’m stuck because Episode is making me spend gems since they didn’t give me an free option

It’s a bug, bc I played it yesterday and had a free choice. I’m so sorry you ended up like this

I chose the gem choice to adopt a pet in order to get in the ball, but for some reason it didn’t register

I’m glad you warned me because pet adoption is the easiest way to con me into spending gems.

Oof. Hopefully they fix it by the time they blast the story on IG. There’ve been a few times in the past that the CC trapped people with a gem choices barrier, and those usually got fixed.

I’m glad you warned me because pet adoption is the easiest way to con me into spending gems.

Lol. Like you said though, the story just needs some de-glitching, or it could be a meaningless choice. It sucks because you don’t even see any animals to adopt to begin with.

The original was a pleasant surprise because by then I was already jaded when it came to Episode “romance” stories. The LI is genuinely sweet for once and his sudden “head over heels” feelings for the MC never once come across as creepy or prying. Bravo, Episode, you guys chose an actual winner for once