Does the story fit the shelf, is it complete? Does the cover represent the story, would you reread? Who is the audience for the story, do choices matter, is the summary misleading, does it fit the genre? Is there any other stories that might fit the shelf?

Define Future by Ana Stacy : The story is not complete, but it def fits the shelf. It’s about a girl who is like a time-keeper, and has to keep stuff from being stolen from like anti-time keepers? I just completed season one, there are two seasons, me rambling -> and I was planning on binge reading it like this week before the shelf, but I’m conflicted because her story is already spiking, and if I binge read all 10 episodes left, she’ll spike, but she’s already spiking, so I might wait 3 weeks for her spike to die down, so I can respike her.<- numbers nerd. ---- The story is fantasy, and you can pick your sexuality. I’m a bit strange, and so I made the love interests look like me… so I’m trying to date myself, it’s an interesting concept lmao. ---- The choices do not matter. The small cover matches the final scenes in the episode, where as the necklace represents the MC’s necklace.

I’d say the audience would be fantasy lovers, spot directing lovers, Sci-Fi lovers. It’s a slow progressing story which might bore some people.

Moments by Sarah Robbins - I came across this story through Episode Knitters, as I believe the story won their hidden gem award. I’m only like 6 episodes in, and the only reason I stopped was because I ran out of passes

Does the story fit the shelf? Yeah, but with a pause. Yes it fits the shelf, but time travel is what I think of when I hear Past & Future, not really super powers. Nevertheless, I’m happy the story is on the shelf.

I’ve had Mysterious: The Resistance saved in my favourites for a while now so I figured today was a good day to start! I’m two episodes in and I’m really enjoying it so far. The only reason why I had to take a break is that the episodes are very long. Choices matter and there are multiple endings. The story is set in a dystopian future where women are forced to be with women and men are forced to be with men and being with someone of the opposite gender is illegal. I thought the concept was interesting. The directing is decent and even though the episodes are long, the story is well-paced and interesting. I have a lot of questions right now and can’t wait to see them answered. The story is complete.

I’ve also read Eternally 80’s but I read it back when it was “complete” (just one season) and haven’t continued yet (although I definitely will be). I believe she’s currently on season 3? It’s a lighthearted and funny read (it’s a comedy and it made me laugh a lot) and it’s also an easy binge-read which is partly why I’m waiting- I figure I’ll just wait until she’s done and binge the whole thing

. I guess it fits the shelf? Although the story is set in the present, the ghost died in the 80’s and is a bit confused by the modern day. When I think of “Past and Future” I would probably expect the entire story to take place in the past or future, rather than this. (That being said, I have no idea what happens in seasons two and three.)

Edited to add: I mentioned on the last shelf that I didn’t feel that the “split” between stories with a lot of reads and not that many reads was very equal. I think this shelf is a lot better! When I checked this morning, three stories had <10k reads, two had <50k and the most read story (Eternally 80’s) had around 150k which, while a lot, isn’t anything crazy high.

Yay, two of my favorites on the shelf!
Both have been already mentioned, but I will add my comments as well:

Moments - I love the directing, the characters, the dialogues and the well-written choice options. I remember the author shared the story in my thread by the time the H&V contest ended, and I felt sorry for her because she couldn’t submit it on time, so it’s great to see it featured.
Congrats @sasarahbear!

Eternally 80’s - @EliseC, I wanted to add something “smart” to your post, but I’m actually also at the end of season 1, so even if I wanted to, I can’t spoil anything for you

I think it fits the shelf though and I would definitely recommend it because it’s pretty funny and the love interest’s personality is likeable, at least to me (which is rare).

So I started Eternally 80s before the shelf, but was only up to episode 3, so over the weekend I read up to 14. I’m actually surprised I made it so far, but I did find the episodes to be on the short side so it didn’t take me long. I really like the theme of this shelf because it’s so unique. Would I say it fits the shelf? I’d say so after I read the little blur on the app, but based off the title of the shelf alone, I didn’t think ghost stories would be there. I don’t think choices matter TOO much. Or at least it doesn’t feel like it so far. It’s pretty funny, and I think the fast paced romances really suit this story, so I don’t complain about them like I usually do with other episode stories.

I am going on a vacation today, I don’t think I will have access to wifi (at least on my computer) so I am posting this now. 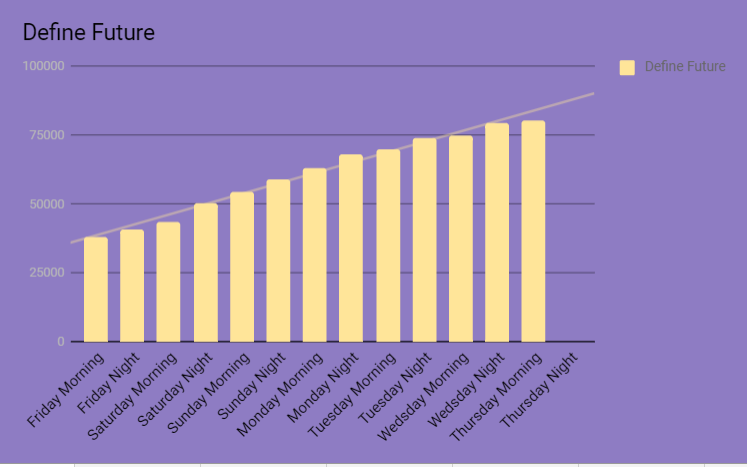 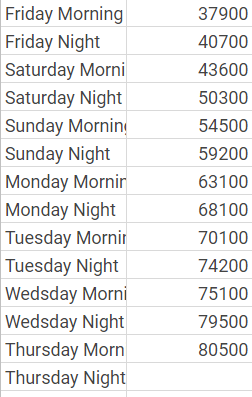 Define Future started at 37.9k reads, and ended (at least this morning) at around 80.5k reads.

The stories largest jump was from Saturday Morn - Saturday Night. I believe on Saturday -> Sunday, her story hit rank #1.

This is awesome! Did you track this for all the stories?