Okay… not that I have any problem with this update, but honestly - when I saw “punk”, I expected it to be like this more or less (what not 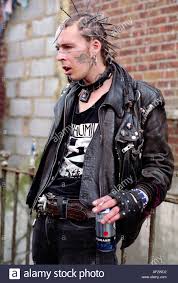 Or at least leather clothings, chains - something that is punk-related

But, I don’t really see how does this update have to do with punk culture. I just don’t see how it is punk. Not at all

It is pretty disappointing. Not what I personally expected when I saw the word “punk” on the title.

This look is cute, but it doesn’t give me ‘punk’ vibes. I mean yeah the color scheme might be correct.
But when I think of punk I think of clothes like this.

that update is not great tbh its not what the community really needs plus the colour variation is really poor overall disapointed , plus the scars should have been released in the scar update just saying @ me if u want im ready

oh god that mentality again if someone is not satisfied let them say it , its not removing the thing for u or changing anuthing. I guess if next week we get a trashbag outfit no one should say anything too

we can agree to disagree. but I see u r point and hope it serves a lot of people
the boots are not bad tho…

I think their point was if they were gonna release a Punk update at least add more variety like more piercings, leather jackets because theirs like 2-3 ones we don’t have for females… fishnets. Those kinds of things.

I allow you to feature my character @Melani3

The new stuff isn’t showing up for me

The background update got me more shook than this on—wait a second IS THAT WYATT IN YOUR PROFILE?

Holy moly I haven’t seen that show in so long, lol! One of the few best Canadian cartoons! Wow what a trip down memory lane.

Where’s the this tattoo set? In this update?!

They haven’t released it as a whole set. So far I’ve only seen it in a couple featured stories: Mafia’s Girl and Rule Breaker. All the pieces have been released, though: Skull and Stars Chest Tattoo, Lace Forearm Tattoo Solid, and Tribal Arm Tattoo. However, the forearm and arm tattoos don’t layer like they do in that photo.

I know that’s why I’m saying this

we don’t have the set

Sorry, I didn’t realize your question was rhetorical.

Hahahaha it’s totally fine SORRY! It’s just annoying too because we can’t have more than one tattoo at a time and it’s like why?!

Yeah, it’s especially frustrating when it LOOKS like they are compatible in the portal and then they don’t show up together in scene. Sadly, that’s the case for the tats in this update as well.

new update is out!

Hey everyone, This week we’re celebrating Pride month in the United States with a highly requested set of outfits and accessories for trans women! We have some new long hairstyles to go with the shirts, dresses, and shoes! As we’ve done for the past few weeks, we’ll be featuring some of your styles using these assets on our Instagram account, @EpisodeCreators! Tomorrow morning we’ll be making a post with some of our favorite characters and outfits from this thread. Be sure to say you’ll allow …