If anyone is willing to help me, it would be greatly appreciated. I am so new to the writing scene on episode (I write in LIMELIGHT) and I need help with an error that I’ve had on my script for almost two days. I will attach it below, if ANYBODY can help me figure out how to fix it, I would be so great. Thank you.

well to make a character talk you need to do it like this
CHARACTER (animation)
Hello?

There’s no need in @

It worked! But then it’ll say that the animation isn’t a directing command. Should I just remove the parentheses?

You should. You could @JUNE is call_out_neutral

So, it let’s me do the command and dialouge, but there’s a delay. Can you help me with the delay part? Because she doesn’t speak out until the command is done and I want her to talk while it’s happening.

I can help. Just send me the script!

So, it’s basically in June’s first words out loud that they delay? I’m not sure if I need to reword it with the animations or whatnot? But if you could help me fix it, that would be so greatly appreciated. 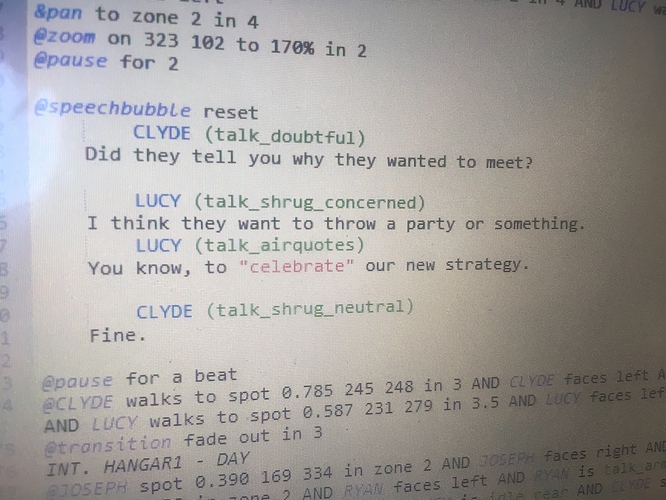 No problem. If you have any other problem feel free to DM me.

I will! Thank you!

Actually, one last thing haha. Do you know how to take a visually take a character off the screen and just show what they’re saying? This is how it’s currently written:

(BTW, it’s only for Chandler’s line.)

Do you know how to take a visually take a character off the screen and just show what they’re saying?

(Let’s say you’re in zone 1)You can place them offscreen like this:

OMG, thank you. Now I can finish the chapter! Thanks again!

Marked as solved and closed. Thanks @JemU776!