Loco Amor is problematic and overrated

same. i was lowkey triggered. disgusting.

Alrighty, so I see some people looked into the fan thread. My intentions were never to bash and cause direct responses to these fans, I just wanted to share a thread I found with different perspectives. I should’ve written it on the original post, but please do not quote or respond to these fans on the thread, I don’t want this thread to get shutdown or possibly hurt those people, regarding of their support to Ora. These screenshots from the story specifically were the main reason I decided to share, especially the suicidal screenshot. We do not know the full context or scene with that single screenshot, my assumption by the bar backdrop, is that another character is excessively drinking. Which leads to that comment by Rodrigo. Nevertheless, I found that screenshot absolutely shocking to see, suicidal should’ve never been used. 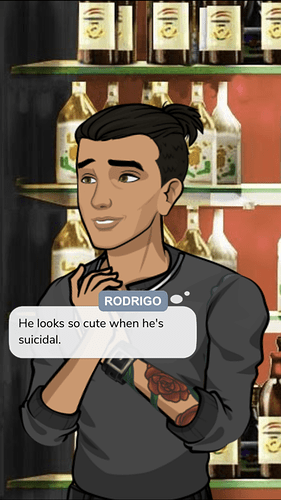 Damn I didnt know sucide was cute does that mean everytime I have tried kiling myself someone thought I was cute??

(Btw before you come at me I didnt start it either)

I feel for you, and I’m sorry you had to experience this. As someone who isn’t or hasn’t been, I would know better than to say that. I assume Ora also hasn’t gone through the struggle either, because I assume if she had, she wouldn’t even think about typing such a thing.

I know Ora has constantly apologized for her mistakes, but I feel like she truly isn’t sorry, and doesn’t understand the severity of moments like these.

She apologizes so many times but I feel you, it doesn’t seem sincere. At ALL. I’m glad YOU understand that it isn’t a joke. Because it’s not. It’s really not funny. It’s sad that she didn’t stop to think about how it could affect others.

Damn I didnt know suicide was cute does that mean everytime I have tried killing myself someone thought I was cute??

wow… that’s one way to put it.

I know Ora has constantly apologized for her mistakes, but I feel like she truly isn’t sorry , and doesn’t understand the severity of moments like these.

the more i talk to people about this situation, the more i’m getting fake vibes from her. it’s becoming very obvious, even in the way she words her thoughts lately.

Can someone enlighten me? Just found this thread, and am curious.

there’s a whole discussion on this. if you don’t want to scroll, refer to the original post and the links to other threads/posts it provides.

Every time she apologizes, she makes it about herself . About the hate (aka criticism) affects her . About how stressed out she is. That’s why none of her apologies seem sincere.

and that’s the tea!

exactly. the random fucking hits aren’t funny. i guess it’s only the female characters that are allowed to be abusive assholes for no reason. if the genders were reversed, oh god forbid.

PREACH! literally if the guys started hitting all the girls and being abusive towards them, everyone would be TRIGGERED. but since it’s the girls, oh no problem their allowed to be problematic. random violence is not funny

exactly. if the guys started hitting the girls everyone would be like “TRIGGER WARNING” “PHYSICAL ABUSE” “FEMALES ARE ABUSED IN THIS STORY” but noooo the guys are allowed to be hit at RANDOM. TIMES.

she doesn’t want to change her “jokes” because that’s what got her views in the first place.

Didn’t she also steal lines of poetry without giving any credit? AT ALL. The lines of poetry which she used in her story were created by another person, It would be ok if she gave credit. But she didn’t, this may not sound like it’s a big deal. But poetry can be hard to come up with sometimes, and I give props to people who can, cause its not easy for me

I tried writing a poem before, it’s really hard (for me).

tbh i feel like this situation is a very recent one; i’m pretty sure loco amor has been out for quite some time but no one seemed to see the issue with it because a) we didn’t see it or b) we didn’t quite understand the actual gravity of the situation.
so when someone did point it out i think ora became passive aggressive because for about a year she’s been getting nothing but fans and positive comments and now there are suddenly so many people coming after her.
i think she’s quite shocked to see how many people have actually caught on to everything that was wrong with it and now that everyone’s coming after her, she doesn’t know how to react, which is why her apologise seem insincere and she often doesn’t know what to say/do.
for real, i can’t say anything because i’m not her, but that’s what i speculate.

I can not come up with one, when I do it never sounds good. I gave up trying to awhile ago tbh-

And wouldn’t you think that if you got so much complaints on something in your story that you would change it? And make it better, how come she’s not doing this. She says to “not read” yet things like what she mentions in her story should not be ignored. It was good in the first few episodes, but after I starting noticing certain things. I never read again.

yh exactly, i get what you mean but in her mind she see’s all of it as hate especially since a bunch of people are coming at her all at once. if so many people come at her, with some of them being extremely mad, she’s going to see it as hate.
but yh it’s pisstaking to see that she’s not taking any steps to solve this sitaution at all.