Looking for advice on a story description 🙃

tl;dr: Scroll to the bottom for a description poll lol

Hey there! I’m writing my first story on Episode, and for some reason I’m having a disproportionate amount of trouble creating a good description.

I would greatly appreciate any feedback on what I have or suggestions for alternate descriptions!

I have the plot mostly planned out, I just have a lot of trouble fitting it into the character limit. I also find myself irrationally picky about descriptions lol; too many of the descriptions I’ve tried are either cliche, give little insight into the story itself, or just seem gimmicky. On the other hand, if that’s what readers like to see and that’s what helps them choose a story, then I’m fine with it!

Let me just throw some information at you so you have a better idea of what the story is about. This is going to be a bit long, sorry:

Title: Goddess of Nothing (Limelight, CC) 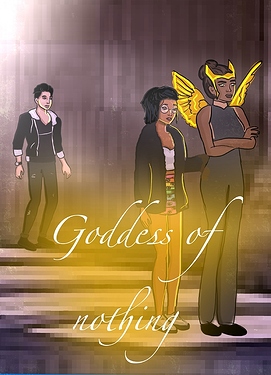 My attempt at a plot summary (without spoilers lol):
In this interactive mystery/fantasy novel, you play as Ara, an overcompetitive, ambitious 18-year-old who, up until now, has lived a normal (if privileged) life. However, her world is turned upside down when she learns that both of her parents are Greek gods, and that her birth was planned so that she could compete to become an Olympian. After being whisked away to Mount Olympus and thrust into a competition against 10 others like her, Ara is faced with a variety of challenges. From the moment she steps foot on Olympus, Ara encounters murder attempts, mistaken identities, plotting relatives, moral ambiguity, lies from all angles, and worst of all, feelings (not to mention the competition itself). When she is unable to trust anybody around her, how can she balance winning the competition and uncovering the truth?

Major characters:
Ara: Independent, confident, capable, and ruthless to a fault, Ara is not used to losing. Despite her efforts to hide it, however, she’s overwhelmed by the new world in which she finds herself, and by the depth of the secrets she faces.

LI1: She’s gorgeous and powerful, with dramatic emotions to match. How long can she hold up under the pressure of knowing a little bit too much and having nobody to share her burden with?

LI2 (she’s really tough to describe without spoilers, yikes): Seemingly sweet, loyal, and stunningly naive, she’s drowning in guilt from what she knows she must do. Will Ara win her over, or will this dark horse end the game before it can even begin?

LI3: Charming, flirty, and intensely charismatic, he is a force to be reckoned with. However, his parentage has left him disillusioned and at a severe disadvantage, and he’s willing to bend the rules and manipulate others to make up for it …

LI4: Everybody (his parents most of all) expects him to win the competition, due to his intense intelligence and strategic abilities. Only he knows that his entire life has been a lie, and that his only escape is winning the competition and finally implementing his own agenda.

P: As a goddess and Ara’s inside guide to Olympus, she has quite a bit of power over the younger girl. But do her tragic past and resultant emotional instability excuse her morally questionable reactions in the present?

Possible descriptions:
Alright, sorry that the background was so long. Here are the two ideas I have so far (I had more but I was really unhappy with those ones

Edit: Thanks to bellecass’ great idea, I made a poll! If you choose the last option (or either of the others haha), I’d love to hear your other suggestions and feedback for the description too!

Thank you so, so much for taking the time to read through this, and I greatly appreciate any insight you can offer!

As the daughter of two Greek gods, Ara must compete to be the 12th Olympian. When faced with love, secrets, betrayal, and malevolent forces, can she succeed? (LL)(CC)(LGBT)(4 LIs)

this one might be the safest way to describe your story to hit every plot point.

also, maybe try making a poll between these two?

Thank you!
"One wears charm like a cloak. One holds a deadly secret. One has too much to prove. One doesn’t exist. With all four competing against you to be the 12th Olympian, can you succeed?" just barely fits, but then I would have to get rid of the (4 LIs) (LGBT) at the end, which I feel like readers might want to know…

Idk, this is why I keep getting stuck haha

As the daughter of two Greek gods, Ara must compete to be the 12th Olympian. When faced with love, secrets, betrayal, and malevolent forces, can she succeed? (LL)(CC)(LGBT)(4 LIs)

this one might be the safest way to describe your story to hit every plot point.

also, maybe try making a poll between these two?

I agree, the second option feels like the safe option, albeit a bit less creative. Thank you so much for your feedback! And good idea on the poll; I’ll make one rn!

I’m giving this a bump so I can hopefully get a few more votes/opinions!

Giving this one last bump since votes are tied!

…and one last bump for good measure…

This is absolutely eye-grabbing and I would click the heck out of this. Definitely the one to go with. It’s very different from most descriptions and it’s unique to the story. The choice of wording is immaculate and it reveals the intentions of the story without spoiling anything. This is a winner!

Oooh cool!!! It’s not a super common name so it’s crazy to find somebody else with the same character name!

! It looks like that description is winning in the poll too (for now

) and I definitely like it better, so I’m taking this opportunity to commit to it before the poll changes haha! Thank you so much for your input!