Looking for help and advice

Hi guys, I just wanna ask how do I create an art scene, if anyone came help me please also I’m really struggling trying to get my story on the move everytime I think I’m pass the first chapter an other error appears if anyone could help I’d be grateful thanks.

What’s error you are getting?

On which line it shows error? Can you take screenshots of it. 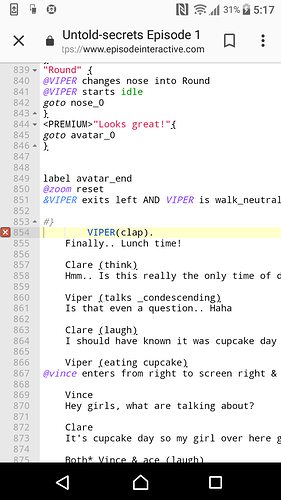 I think that error is coming up because Viper has exited the screen, you need to put in his entry back onto it again or it wont accept it

Thanks so much I’ll go and try it now

That work that time the error moved but now its moved too where I start Viper having a conformation do I need to put it in brackets or anything when I’m having each character talk to each other, sorry again if I’m bothering you I’m so lost trying to get the hang of it.

Hey, are you using ink? (I’m pretty sure you are judging by some of the animations you put in)

If you are, I don’t believe the animation clap exists.

You’re not bothering me at all sweetie!
Would you like to PM me then you can send me a screenshot and I’ll try to work it out with you… if i can’t help then you can ask elsewhere… also I don’t believe that the animation “clap” exists… You might want to try “applaud_loop” or if in LL type applaud and it will come up with suggestions

If you go to your library on the right side of your script on Writer’s Portal you will see Animations by Character. Check that out to see which animations exist and can be used.

Also when you’re having CLARE think or doing a non-talking animation, it’s better to put her dialogue in parentheses () so that it shows up as a thought bubble.

Also, for where it says VIPER (eating cupcake), that’s not correct.

Usually, animations will glow green in your script.

So it would either be:

*This means she will eat the cupcake while thinking something. If you don’t want her to think and instead, you want her to say something you’d remove the ()

*This means she will eat the cupcake without saying/thinking anything.

Also, I’d recommend you start off by watching Joseph Evans’ tutorials on YouTube as well as read the guides provided by Episode)

Also Both * Vince and ace (laugh) isn’t a valid directing command. Sadly, there is no command for both of them to speak at the same time. However, you can create a character called BOTH and use that.

*Replace dialogue with any wording you want and replace animation with an actual animation that exists.

You also have some other errors but no worries they can be solved : )

Thank you soo much, I’m gonna go watch Joseph Evans tutorials on YouTube now thanks, and I’ll be sure to correct the others, but I may need to come back again for help if that okay

Thank you so much, I’m gonna to watch Joseph Evans tutorials on YouTube and I’ll come back to you

, that would be super thank you ill pm you once I’ve watch the tutorial thanks.

Sure, of course, we’re always here to help and remember it’s always important to watch tutorials before we start