Hey guys,
So I haven’t really been on the Episode app for almost a year, as I found the RP/SG community in these forums and set up camp. However, I’m planning to get back on it.
An awesome forum friend and myself, have been writing together for a number of months now and we’re planning to adapt our story for Episode.

What I’m asking from you (so that I don’t become unmotivated and let her down) is for suggestions.
Can I please get some suggestions of some stories with really original/EPIC/mind-blowing intros?!

Feel free to check out mine

I’d say the intro isn’t bad at all, haha. 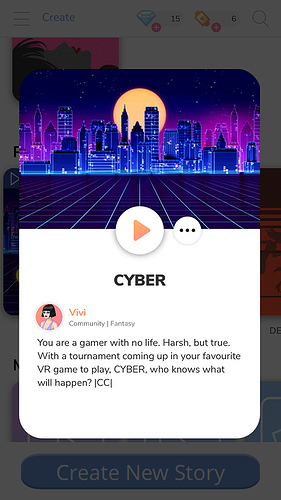 I also recommend The Kindest Man Alive by Margo Vincent.

Have you read Fine Line yet? I was pretty tired and bored when I found the story and two minutes later I was like

Of course I’m not saying that you need Evil Ebonni’s directing skills in order to make an epic intro who could compete with her anyway, but as a reader I love when a story starts straight off with action.

Yes, I did love the title sequence in this story, though then it continued on like most other stories. In saying that, it did intrigue me. I got through half the chapter, and despite some grammatical errors, I saved it and will continue.

I also recommend The Kindest Man Alive by Margo Vincent.

Yes, the opening effects, as well as special effects in this were quite amazing and I will be continuing to read at least the next couple of chapters. Although, the baby being safe from magic when in its mother’s arms was a little too like Harry Potter to me.

You’re right, the directing and effects in this story are phenomenal! I love how it just goes straight into the story without any kind of intro. This is definitely on my reading list!

Thanks for giving it a try! Can you point out those grammatical errors? Would be much appreciated.

Sure thing, will restart the chapter and go through it.
My corrections are in bold.

If you want me to do the others, I can, but just give me a bit of time!

Thanks! There’s no need, haha. Hmm, I think most of what you pointed out would be fine as they were, and one is exactly what I wrote (Board of Fame), I checked. But I will fix some of them based on your suggestions

Thanks again for your time!

No, sorry, the reason I pointed them out was because it was incorrect. As for the fame one, it was the word I corrected but the comma after it. … Some? Okay, well that is your choice, I guess.