Is this new?
Those who have it what are ur thoughts?

At the start of 2017, the Episode team sat down and looked at our app to decide what we wanted to focus on this year. As we evaluated the many important issues and priorities around Episode, one thing was especially clear: our stories and platform should reflect the amazing diversity of our players and the world around us. In regards to that, we’ve let you down and we’ve spent the past weeks reflecting on how to do better. When we use the term “diversity”, this includes but is not limited to ag…

Hmmm…Even in 2019 there’s no diverse originalty 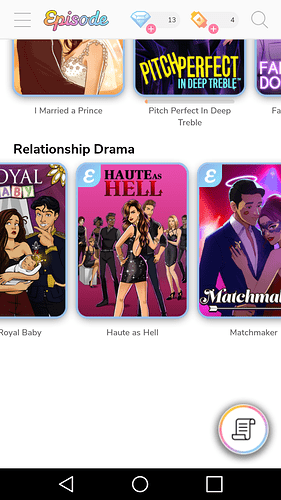 Am I the only one that sees it?

Interesting, I found this old thread and perhaps you are part of like a second round of testing?

It’s that time again sisters! Episode has released ANOTHER featured story! They’re really on a roll recently with the featured stories.

So, I just hopped back on the app and was graced with another “Episode Original Story” but this one is called “Love on fire” I’m not sure how it is yet, because I’m about to start it right now, all I know is that it’s in spotlight. Based on the description alone I feel like it may be something like “Bad Boy Bachelor” but… Limelight edition… ya know?

Yeah whatever happened to this story? It still shows up for me but hasn’t been updated in forever, and the episode logos been taken off of it?

Same i forgot about it until u said something

Are you able to send a link to this game? I was playing and think somehow I accidentally deleted it or something… It will not even come up in a search