Hey. Is there an easy way to fit five characters at the INT. CAFETERIA TABLE OL - DAY ? I would like to have them in the same screen but its way to packed. I’ve seen others split the scene by cutting back to zone 1 and 2 but was hoping I could find a different method. Anyone know any?

here is example of mine scene in club where I have more people: 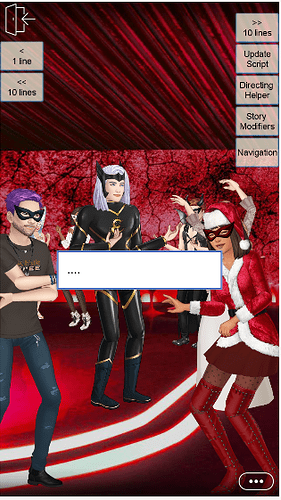 Yeah I have them downsized to 1.250 but its still a little cluttered. Having them any smaller wouldn’t look too great, they’d be too small.

if you cant put them on background and need them infront and siting behind the table than 5 in one scene will not be ever looking good I guess…I have maximaly 3 people siting in front of table in one zone…but with pan from zone to zone you can show to the reader who is there and by the dialogue you mostly do not need to see all people so with pans and zooms reader will get that there are 5 people at the table and the scene will look even more dinamic than just have the dialogue on one zone all the time.