Is this some kind of joke? Wasnt enough that one of their greatest stories, Pitch Perfect In Deep Treble was removed, now they do that with Mean Girls too??
WHY ???

I’m not 100% correct (this is just a theory) but they probably deleted it because those stories were really old and the people the stories were with (like Cameron Dallas, mean girls, pitch perfect, pretty little liars) those franchises/movies/series ended a while ago so it isn’t relevant or popular anymore so they probably got rid of the stories. Both legal teams (episode and any franchise) has to come with an agreement on what the story can include and how long the stories can be posted so the contracts might have ran out as well.

They could also just be getting rid of that style of episode stories and only have classic, ink, and limelight.

So, they take that down, but leave crap like “Find a Boyfriend in 5 Days” (something along those lines) up?

I wrote a new post because in this one i only talked about mean girls being deleted, i did not knew there were more… peoples need to know
And i had to make a new one because it didnt allow me to add the image here

All at once?? Even so, they could say “hello we will remove those stories in a week, heres unlimited passes at them so you could enjoy one more time” but noo

The legal agreement that Episode has with the companies that these stories are adapted from, eg Mean Girls is owned by Paramount Pictures, has most likely expired and maybe the company no longer wishes to renew the contract.

So Episode cannot legally keep these stories on the app as it would be copyright infringement. They are not obligated to inform their user base of this change as that is all confidential between Episode and whatever the other companies are

And all licenses would expire at once? It wasnt just Mean Girls, but others too. Why did they hide the other two seasons of Demi Lovato? Dolan Twins is gone too. I think Hollywood Days With Hayes is also gone. They cant just say, just a coincidence that all those licenses expired in the same day. Maybe they didnt want to renew them, but if so, why couldnt they notice they players? Hey do you lile this story? Were gonna remove it so play it before this

People have different contracts with different companies. Maybe they all were only till 2021. Idk I don’t work for Episode, it’s really not our place as users to question why they only had contracts with companies till this specific year. Maybe the production company didn’t want to renew it. Maybe these ones aren’t generating anymore reads so it doesn’t make sense to renew the contract

If the production company didnt wanted it would made a bit more sense why they didnt said anything, but from what ive been told it was episode itself who didnt to renew. So then if they knew they will have to take them down they could have said: hey were taking down these on the date … so for a week you have free passes on this stories since they are gonna be deleted. Some new players might have tried them and even spent gems (making them profitable again) while others who already did in past could replay them. Since they no longer update ink and they put limelight everywhere, they no longer promoted the stories, thurs no longer getting an audience to make profit. I like ink alot but since limelight is the most used, they could have made a limelight version of those stories (except for pitch perfect who already was) and it would have gained a bigger audience. When they only promote limelight, new playiers dont know about ink or classic so thats why those stories didnt had such a big audience anymore

You don’t know anything. Nobody does. Only Episode knows why they removed them and they are not obligated to share their reasons with you or anyone else on their user base. Keeping on a story that is intellectual property of a film studio would require them pay them a fees. You can’t even know how many people still read these stories as there are millions of users who aren’t in the community. Giving some random free passes won’t guarantee that the story will be read and will generate any revenue from gems. They give me free reading for a bunch of featured stories everyday and I don’t read it.

Like other people have stated Episode stories that use copyrighted material are under contract. That contract states that Episode can use these materials for a limited time before the contract ends. Whether the contract is going to be renewed is up to Episode and the IP holder. Also Episode has to pay the company a large fee (depending on the popularity of that IP) to use their IP in the story. So maybe Episode’s team felt that they no longer can afford to pay that fee or they simply feel that it’s not worth paying for existing properties when Episode can just simply pay Episode authors (with that already have a larger fan base) to use their stories.

Also on my app the stories are still there

Mean Girls: Senior Year is so fetch! Check it out! http://bit.ly/EpisodeMeanGirls #MeanGirlsEpisode

I love Falling for the Dolan Twins! Check it out! http://bit.ly/EpisodeHere #episode

Here are the links knock yourself out

The links for Mean Girls and Dolan Twins dont work, only the ones for Demi but those thats because it wasnt removed yet. I get it its under a contract but they could have just told us the stories were gonna be removed so we could have replayed them before they took them

As long as episode team told me the reason they took them down i guess i do know something? They said they didnt renew the license, i get it why they would take them down if they werent profitable, all im saying is a notice before would have been nice… its their game so they arent forced to give a notice but that dosnt mean it wouldnt have been nice for the players

THIS IS JUST A FEW FROM THE STORIES THAT WERE REMOVED AND YOU DIDNT GAVE US ANY NOTICE BEFORE! WHY???

Deleting great ones like Pitch Perfect and Mean Girls and leaving the ones that have horrible plot and bad directing?? Your making yourself look bad when peoples read an “Episode Original Story” that is so horrible and like it wasnt enough, for new users they added the function where they are forced to read 72 chapters i think until they get acces to the full app with stories written by the community.

Deleting the GOOD stories and leaving the bad ones that peoples complained they are horrible and you still kept them and didnt even bother to edit them?

BEAUSE OF THAT ALOT OF THEM DONT EVEN READ FURHER AND UNINSTALL THE APP, YOUR LOSING YOUR PLAYERS!

THEY WILL LISTEN ONLY IF WE DEMAND THEM, SPREAD THE WORD PEOPLE
#putthembackepisode 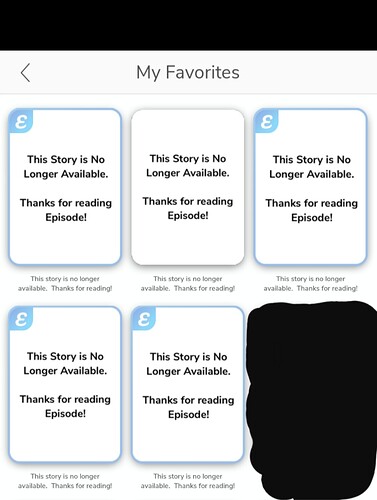 I had to make a new one as in the other one i couldnt add this image. I tried again and again but it didnt let me.