So, I have a character and she is looking at the mirror, and I want someone to fade in and she can see that person, is it possible to do this? If so, can someone explain me on how to do it? I have the mirror reflection and everything, I just want to know how to fade the another person. Here’s the code that I have right now, I am just waiting for someone to help me with the fading. I tried to do it, myself, but it didn’t work.

hey if you want to fade in the character your gonna have to upload the background your using in the scene as an overlay !

Please visit my website for more templates and guides! https://www.dara-amarie.com/ ​ Hello everyone! I had a lot of people asking me how to fade out characters or change their opacity. The answer is “you can’t” because it is not yet possible to change the opacity of a character. BUT there is a trick to make is appear as though your character is fading in/out, and I will show you how to do that. THE TRICK: Upload a background image as an overlay and change the opacity over your character(s…

I did, I just need someone to help me with the fading.

Oh alright, well if you want the character to fade in then you would have to change the opacity of the overlay so it’d have to be

^^ T, set the seconds to how fast you want the character to fade in

So, I do it in the beginning or after?

Let me know if it works

It didn’t work, this is how it turned out. 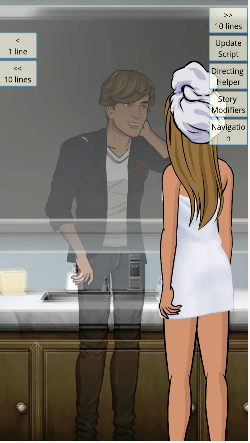 Make the counter as a separate overlay and set the opacity to 1.

Yea, that way it’ll look like he’s actually in the mirror.

Just take the counter overlay, put it into gimp or something, and erase the mirror.

So, I got the counter as a PNG, and it is in the code, now what? 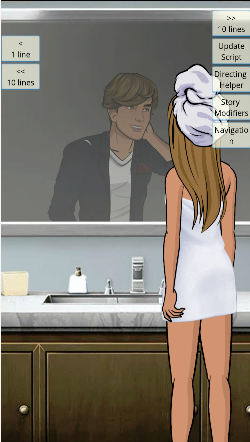 I think it looks good, was there something else you where referring to?

Okay, here is a short story of how I want this part to work.

Sadie enters bathroom, she looks at the mirror, and there, she sees a reflection of someone and the reflection fades in. (Using the Fading Code while using the Mirror Reflection Code.) Like, I want the reflection to fade in.

Does it make sense?

I’ll do it more simplified if you don’t get it.

Me patiently waiting for someone to respond.

Which overlay? All of them? And, you can possibly explain it?