Missing curly bracket although I have one?

It’s showing an error but I have a curly bracket that matches it. Has anyone had this issue? If so how do I fix it?

Can u send a pic of the script + the error pls 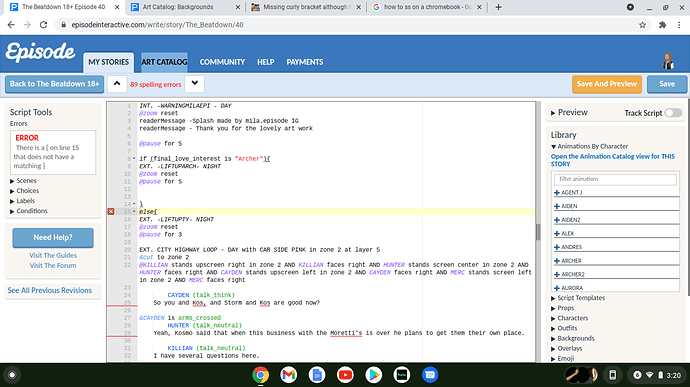 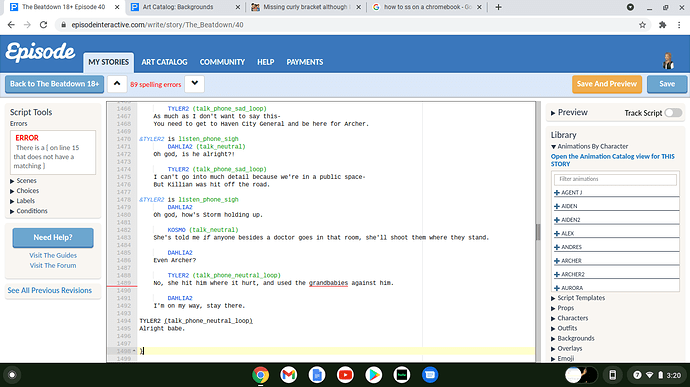 It’s showing that I’m missing the curly bracket, but I definitely have it down there.
I’m not sure what I’m doing wrong lol. I’ve coded like this every episode. Not to mention I saved it prior and it was fine, it just did this on the last save.

and even this one lol

Sometimes it’s not happy if there are extra spaces somewhere. Delete any unnecessary spaces and try. Then you can sometimes add them back

That is so goofy. Alright I’ll give it a shot. I hope it works, because I finally have free time to code lol

Let us know if the problem is solved or not!

That didn’t work either. I’m so flustered right now

Do you have another choice branch inside the “else” branch between the lines 15 - 1498?

I will, but so far these aren’t working, and I’m not sure what’s causing it.

Alright so it has to be something I did in the coding prior, but I’m not seeing anythign wrong. When I took out everything and just left the first background it was fine.

I don’t know what you wrote between the lines 15-1498 but just in case, try typing another bracket underneath the one in line 1498
so it will look like:
}else{
insert coding here…
}
}

I did, it’s still showing the same thing. Maybe the portal is just hating my life today lol

KOSMO
This is exactly what I didn’t want.

&cut to zone 1
STORM (idle_happy)
Or we gonna get this over with so we can kiss each others boo boo’s.

&cut to zone 2
KOSMO
(For the love of everything.)
(This is not the time for these types of fantasies.)

&STORM is arms_crossed
KOSMO (laugh_chuckle)
Did you think a cheap shot was going to work.

&TYLER2 is talk_repulsed
KOSMO (disappointed)
I can’t believe I fell for that.

@STORM is run_fall
KOSMO (laugh_chuckle)
Have a nice trip babe.

&STORM is dustoff_loop
STORM
You done.

&STORM is arms_crossed
KOSMO
Yes, solely because I don’t want to do this anymore.
Plus dad’s been standing over there for about ten minutes now.

&STORM is dustoff_loop
KOSMO (stand_up)
I’ll give it to ya-

&STORM is arms_crossed
KOSMO (talk_arms_crossed)
Well, I’ve been through Chains and Juice.

do you have any choice or any other if/elif/else in between?

if you cant find it open the search window (ctrl F) and write there;

so it will find you all closing brackets you have inbetween

I’ll test it out and get back to you!