My animations do not play in app right

But today some of the animations do not seem to work in app.

This is the scene in portal:

But in-app is Gabriel standing instead of being on the bed. 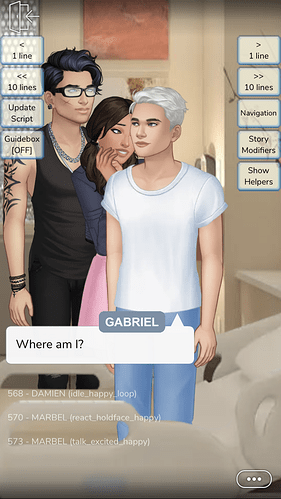 And similar things now happen in almost every scene. But kinda randomly like 10% of animations seem to not show up right…

I reset the app I even reset the phone…still the same…is it my phone or did episode released some update causing this bug?

so I deleted the app and uploaded it again and it works now…huh I would like to know why it suddenly went crazy.

@Sydney_H you can close his

I’m having the exact same issue but only with female characters.

Are you using an android? Idk if that has anything to do with it but I was using the @CHARACTER previews FEATURE command and for some reason she previewed the hair color a whole scene before she was supposed to have it. I even restarted the story progress, but it works perfectly fine on the web previewer

I have Iphone. If I could be sure readers will not be affected by it I would not mid that much…