I’ve done everything the videos say, but for some reason it still won’t work. 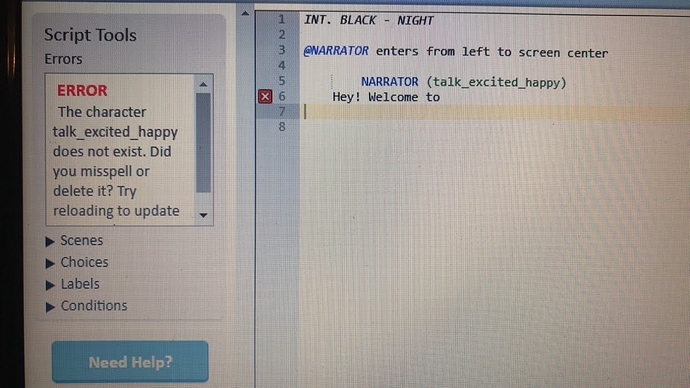 Narrators can’t do animations because the narrator isn’t a character. You need to create a real character and it’ll work. Narrator speech bubbles are just boxes that appear on the screen

But I made a character named Narrator, ps thank you so much

You need to create a character not named narrator

you don’t have to. the speech box shows up automatically.

What do you mean

you don’t have to create a character for narrator because it won’t work. just type:

and it’ll show up as a narrator bubble.

Ok thanks I’ll try that!

what exactly are you trying to do?

I’m just trying to make my narrator character talk with an animation. 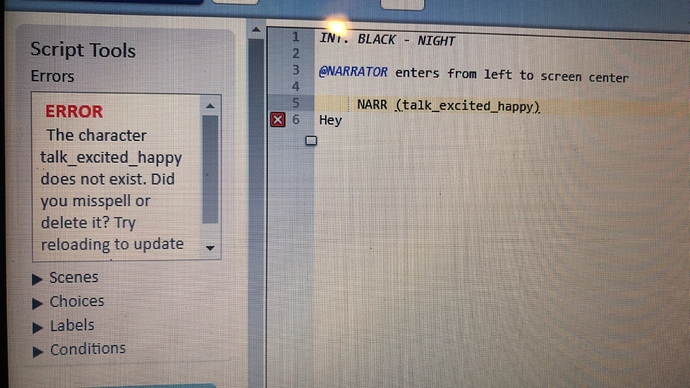 oh. okay then don’t write “NARR” because i thought you wanted a narrator box. if you want an actual character to speak, you have to do make the sure the name is blue and the animation is green which means the spacing on the right spacing. let me show you an example!

Alrighty thanks! Also in that recent picture they aren’t blue and green, but they are now but its still not working.

did you write “NARR” or “NARRATOR”?

As was mentioned by @Em546, it will not work if your character is named “NARRATOR”.

The names NARRATOR and NARR (for short) are names with a special meaning. You should create another character with a different name, for example in @lvqbrl’s example the character is called MC.

yeah. “NARRATOR” is not an eligible character. you’ll have to delete it.