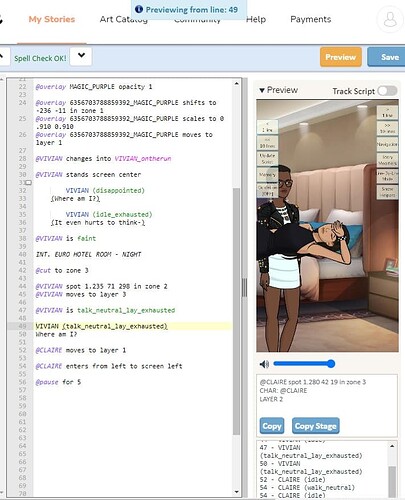 VIVIAN (talk_neutral_lay_exhausted)
Where am I?

I don’t know if it helps but it does for me. Usually, when I write, I like to keep the coded things together and then write the character’s part.

For example (here’s how I would write your script my way):
INT. EURO HOTEL ROOM - NIGHT

@VIVIAN spot 1.235 71 298 in zone 2 and VIVIAN is idle_lay_exhausted_loop (or something like that) THEN CLAIRE enters from left to screen left

VIVIAN (talk_neutral_lay_exhausted)
Where am I?

-Let me know if it works. Otherwise contact me @episode.akm

Try moving the layer command after the enters command.

Edit: Also, sometimes it’s a previewer problem where it doesn’t display them on the right layers, so you can use the layer buttons on the previewer to adjust them. (: But generally I always put the layers after having the characters enter/spotted into the scene.

OMG IS THIS SHEPARD (or uhm… not be rude but Mia…)? It’s been so long! How have you been?

Mia is my daughter haha, I’ll PM you!

To OP: To stay on topic, I hope my previous post helps you with your issue!

I tried both but they didn’t work for me.

edit: Nevermind. I’m just stupid, it works. Thank you so much to the both of you!