so I am done with my first 3 chapters for the Magicka contest. but I am dyslexic and despite putting a lot of effort and run it through Grammarly. I am sure I have missed some spell mistakes. so is anyone who is really good with English wanna help.

I’m a English/grammar freak! Lol. I could definitely help out and be your proofreader

really, that would be very helpfull

Yeah for sure! I love helping people out

and I know not everyone is as good with English and grammar like I am, so I’ve always wanted to be able to help make someone’s story even better

thanks for the help. I have send you chapter 1

I’ve copied and pasted it into a Google Doc’s file so I can edit it on there.

I think it might also help if you sent me your story link so I can get a feel for the story instead of editing the script blind. I realize books are edited that way, but episode has a visual component built in, so I feel that it would give me a better feel for your story and characters. Reading animation isn’t the same as seeing it… and then the overlays, I can only sort of know what’s going on by the overlay names.

Also (not sure if it’s mentioned in the script as I have only started), I like to know where it’s based, to get a feel for the dialect … is it over in Europe for example, as I know you’re based in Denmark, or for example, is it based in the United States as I know a lot of stories are… I’m based in Canada

the story is in the US. thought not a sertent place. ill pm you the link

she has collegge debt. the US is one of the only places that exist

Hahaha I hear ya lol. That’s good to know, since I’m from Canada, I know how the talk. It’s essentially the same as we do, save the fact that it’s the imperial system down there.

the faries are not from US though. they are from fairy kingdom, so I guess Brithis or Irish.

Okay so I’m at the first mini game, editing… so first off, I did have to go to your story link to understand what was happening so I could edit your instructions properly. At first I wasn’t exactly sure what you were trying to say, so I wanted to watch the game so I could edit the instructions so they made sense with the game. One thing I noticed is that because you don’t get to see all zones before it starts readers might not be quick enough for one of them. I got to okay it multiple times cause I could go back, but my first round I couldn’t find the wine rack fast enough. Maybe code in a scan of the zones before the game starts? Unless that would be too easy…? Obviously it’s up to you. Just a suggestion.

Another thing, just so you understand, if I’ve split up a sentence and put on two lines instead of one, that a literary suggestion to split the lines into two dialogue boxes instead of one. Sometimes I feel that having more dialogue boxes with shorter lines/sentences can flow a lot better than bigger boxes of dialogue with multiple sentences in it

Oh and I noticed you didn’t send your first “author narrator” lines… I can edit those for you as well. There are some grammatical errors that I can fix for you if you’d like

If you send me the beginning, just send the beginning up to the point that you’ve already sent me and I’ll just copy it into my existing google doc.

yeah I did not send those lines because the cc was between. and that fill almost 5000 lines.

and yes the I thought the mini game would be to easy if they knew where it was. which is why I dont show the entire screen.

and its fine you split sentence’s up

I thought the mini game would be to easy if they knew where it was. which is why I dont show the entire screen.

Okay, that’s what I figured.

its fine you split sentence’s up

I’m going to Florida for a week, so for the next couple of days I probably won’t edit as much, but I’m still going to try to get some in while I’m down there. I Should have a chunk of time tomorrow to do some

Okay. Still thanks for the help. There is no need to stress the contest is still Four weeks away.

I’m actually really excited to be able to help someone out with my English and grammar skills. So I’m pretty pumped that I’ve finished your first chapter. Did you want me to email the document to you? Or copy and paste it onto our forum thread? Also I just noticed after going through the first half and then watching the link, that after the line “So your name is [JANE] [LAST], is that correct?” That the codes for the choices “yes/no” weren’t copied in what you sent me. Which is fine, it’s just I would’ve made a correction to those as well. I’m just a stickler for grammar LOL. There’s nothing wrong with it, it’s just missing capitals and whatnot… Here’s the screenshot and what I would’ve changed the choices to: 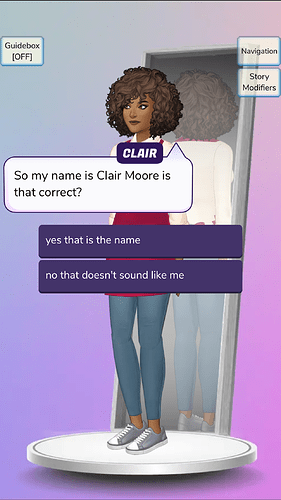 Another thing, I added that she was studying “law and politics”. The reason for that is “politics” isn’t actually a major… political science is… there are also others, but I was talking to someone who knows about this stuff and he said that it would make more sense to study law to obtain a political career. So I was like I’ll just say law and politics. It will just sound better in your story. I know this isn’t a major plot point or anything… I just like to explain so you know why

or going could add it to the end also if you’d like… I saw you had credits there. It just seemed appropriate after mentioning the language barrier, since now you’re getting help on it.

So just let me know how you want me to send your revised script back to you. I’m so excited for you to see it!

can you pm it to me.

I actually asked about the politic part some time ago. did not really get any answaers on it. but thanks for helping with that.

ofcourse the credit is fine. I would have added that myself if you had not, I always do.